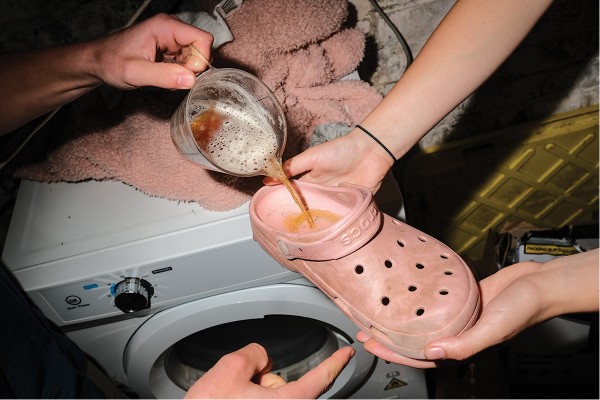 A dissertation submitted in partial fulfilment for the degree of Master of Arts in Anthropology.

Abstract:
A 4-point scale was used to determine the optimal foot vessel to utilise as a booze-funnelling device in what is known colloquially as a “shoey”. This metric indicated that a sockie is the least desirable vessel, while a dress shoe is the most desirable. Further field research is needed to fully verify these claims. Please fund our research.

Introduction:
Described by the New York Times as Australia's Grossest Drinking Tradition (2019), the shoey is an iconic and effective drinking method in which a person consumes their piss via a formerly footbound receptacle. During the middle ages, it was thought that drinking from a shoe or boot can bring good fortune (Friesen, 2001). In the First World War, a German hazing ritual included drinking from another soldier’s boot or the general’s boot after a victory (Hiens, 2016). And while the shoey is a tradition that has stood the test of time, there is a lack of scientific consensus on the best shoe to do a shoey with. This report aims to fill that gap.

The location for this field study was in a grimy student flat, which was chosen due to its real-life likeness to the location one would usually do a shoey. The lights were low, and bumping music was played to simulate the harsh conditions a shoey-er usually undergoes. A secondary goal is to gain an understanding of the physical stresses placed upon shoes and piss during the ritual. This will be accomplished by two willing participants, the shoey-ers, performing shoeys throughout the study and rating them on the following four-point metric: drinkability, shoe permeability, lingering toe taste, and practicality.

Methods and Materials:
In order to keep the taste standardised, each shoe would receive 250 mL of alcohol at a pour rate of 10 mL / s. Beer was selected as the alcohol of choice based on its low pH, crisp refreshing flavours and lack of nutrient substance (Ho, 2019). These properties create an inhospitable environment for any would-be harmful bacteria. Specifically, DB Breweries “Double Browns” (Difuscus) were chosen for their low cost, popularity and tropical tasting notes. Difuscus, of course, is named for the Latin “di” (two) and “fuscus” (brown).

Results:
Table 1.1 (below) displays how the different shoes interacted with the qualitative and quantitative factors as described above. The first test, drinkability, is rated out of 10 and describes how easy or hard it is to drink from this shoe. Liquid lost due to shoe permeability is a percentage of 100%, being how much liquid was lost to the shoe or surrounding environment. Third is toe taste, rated on a Likert scale from ‘no influence’ to ‘highly significant influence’. Practicality describes the other factors surrounding a shoey: how wet is the shoe you have to put back on, is the shoe’s natural environment shoey-acceptable, etc. It is also rated on a Likert scale from bad to great. A control drink of Difuscus was also trialled. 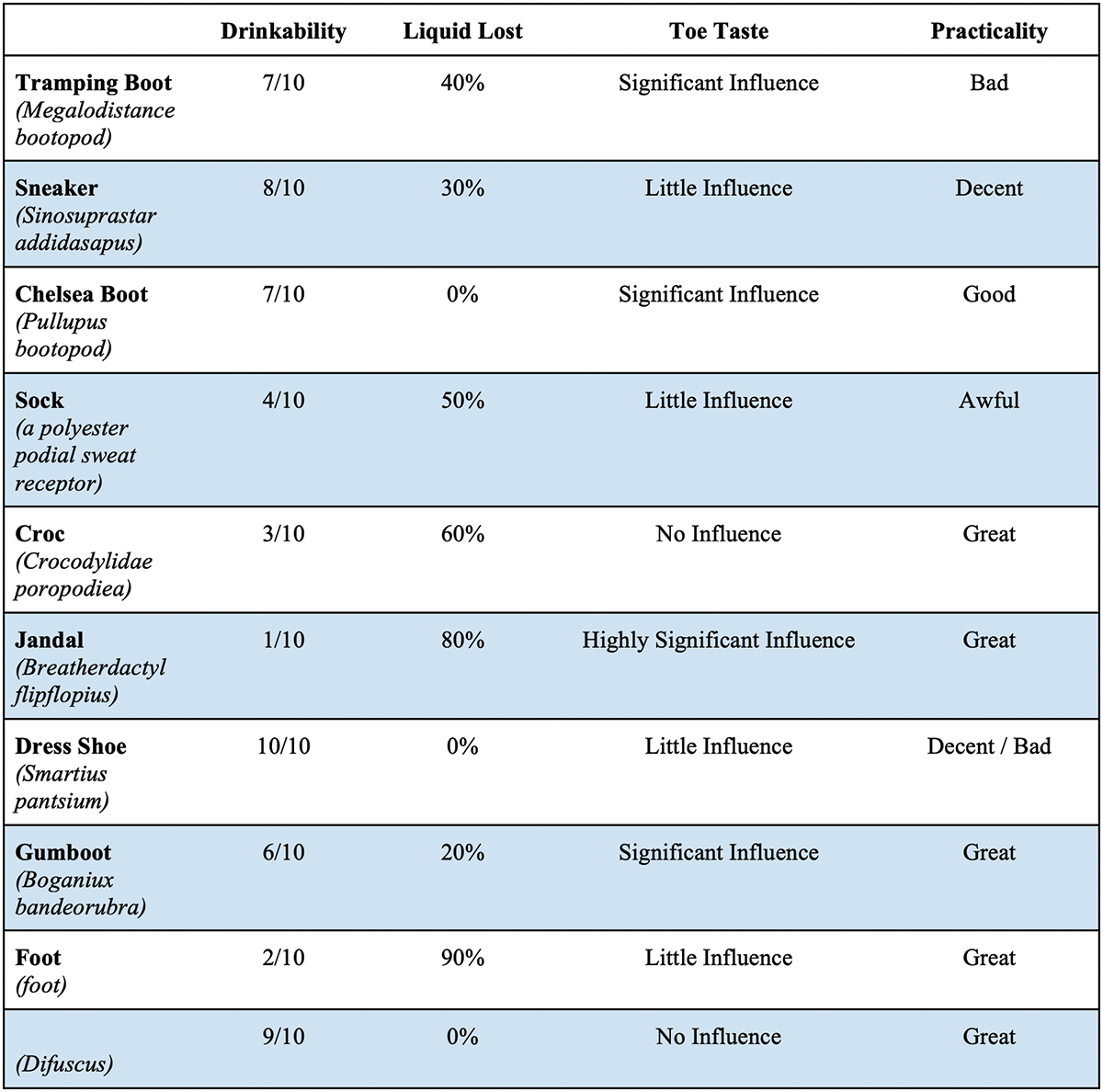 Discussion:
Each of the shoes had its own benefits and drawbacks, some more than others. Both the sneaker and the tramping boot had high soak ratios and foamed up incredibly easily. This could possibly be due to the breathable, soft material that they are made of. However, the tramping boot was definitely worse off because it didn’t actually taste like sweat, but it also didn’t taste like beer. It just kind of tasted like nothing which is more concerning than anything else. This could be due to the fact that these tramping boots are a horrific flavour cocktail of sweat, sock fibres, blood, blister juice, and now beer. The low score was potentially due to experiment conditions, with this one being conducted at 8:30AM while hungover. Not recommended unless you are trying to get a cute OUTC member’s attention. 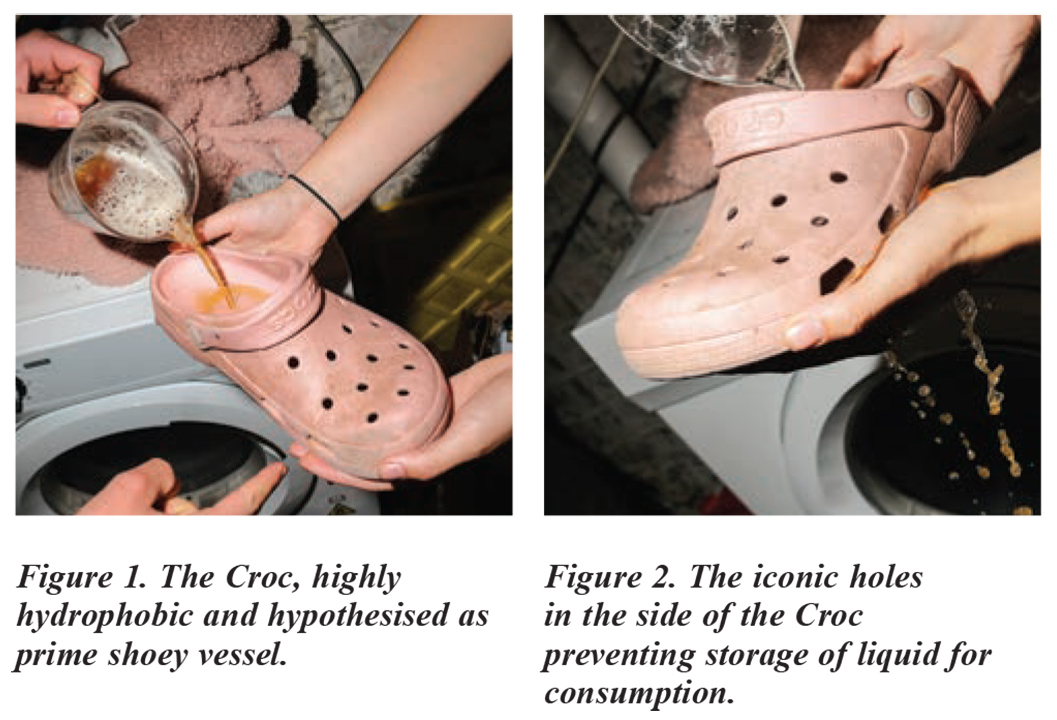 The only thing more disappointing than the lack of cute people in OUTC after you just did a shoey to impress them is the Croc shoey. This was hypothesised to be the number one best shoe for a shoey, because the material of the Croc is highly hydrophobic thus neither sweat nor beer would soak in. However, the iconic holes in the side made it nearly impossible to drink some, if not most of the liquid from the glorious Croc. Over half of the beer was lost to the many holes, like a piss-poor Trevi Fountain. This should have been forseen as, for an amphibious shoe, drainage is of the utmost importance. The Croc will still hold a special place in our society, but that special place will never be on the edge of a mouth with beer flowing through it.

The gumboot was the hardest to pin down for this study. Gumboots have many different uses, thus making the grossness level subjective. These particular gumboots were never used on a farm, making them healthy-ish due to the lack of bovine faecal matter. While the taste was highly influenced by the sediment in the shoe, the rubber provided a fantastically slippery surface for the beer to flow. However, points were deducted for the time needed to complete a gumboot shoey. Indeed with every passing second, you are more and more conscious of the fact you’re doing a gumboot shoey. This leaves room for regret. However, practicality remains high because gumboots are made to be wet. Moreover, doing a bogan activity from a bogan shoe seems culturally appropriate. 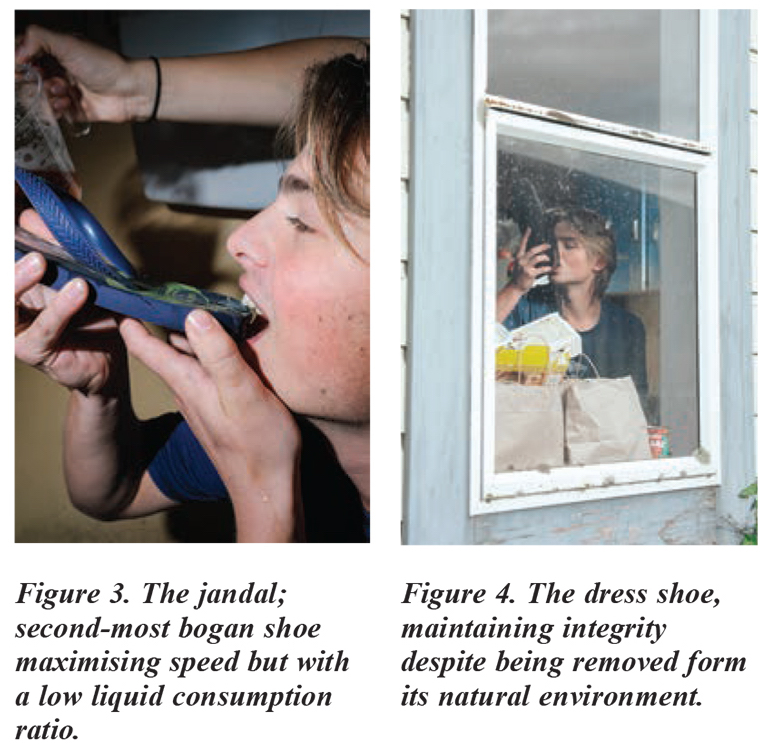 The second most bogan shoe is the jandal. The jandal allows for an efficient, streamlined shoey, where the beer is poured onto the shoe as the shoey is completed. Speed is on the shoey-ers side, but that's where the benefits end. 80% of the beer was lost (see Table 1.1) and the toe taste comes from having to place your mouth over the jandal to drink as much liquid as possible. This leads to a potential make-out session with a Rick and Morty jandal, not great.

Out of all of these body-oriented binge drinking methods there had to be a winner. That winner would prove to be the dress shoe. The dress shoe was easier to drink from than an actual can because it retained all of the liquid and the heel tab was even easier to drink from than a traditional can. Since they’re not worn very frequently, toe taste is essentially non-existent. The only downside to the dress shoe is the practicality of it. Are you ever in a situation that would require both dress shoes and shoeys? Usually the answer is no, but if it is yes, please send us an invite to your event. For science.

The above data indicates that the people’s champion is the Chelsea boot or something similar. The leather material creates a waterproof seal so no liquid is lost to the shoe and the heel tab is an ideal funnel. The practicality of the Chelsea Boot is phenomenal. All it takes is a quick flick and a wipe and 90% of potential piss residue is gone. There is mild toe taste, but other academic research has noted the fact that a portion of the population enjoy the foot taste that comes with a shoey (citation needed).

For every best there is a worst, and the worst is the sockie, by far. It’s a less convenient footie, and despite it retaining more alcohol than a footie, you just end up with a wet sock. What shoes are worth such protection that you are willing to deal with a wet sock for the rest of the night instead? The wet sock will also just get your shoe wet anyway. Only do a sockie if you're curious as to what waterboarding feels like.

Limitations:
One limitation of this study was the time/alcohol phenomenon.  Prior studies have shown links between consumption of alcohol, the passage of time and an inhibition of sensible behaviour (Barclay, 2021). As the shoey-ers tested shoe after shoe, their clear heads and critical thinking abilities worsened. This potentially led to results favouring shoes drunk from later in the experiment.

Another limitation was the temperature of the brew. The beer used in the footie had the advantage of being straight from the fridge. A cold beer on a warm Dunedin afternoon is so delightful that you could almost forget you are drinking it off a foot. Almost.

Lastly: The cleanliness of the sock used for the sockie. In a real life scenario, you are unlikely to be carrying around a fresh sock and therefore will be forced to use your own sweaty, grimey sock. However, it is debatable that a dirty sock could further influence the results, as the sockie already scored firmly in last place.

Conclusions:
The shoey is a time-honoured tradition. This research has shown that as shoe technology has increased, so too have the strategies surrounding the drinking method. Interestingly, shoe styles on the antiquated and modern ends tended to score lower than shoes developed in the mid-century style, perhaps indicating that the glory days of shoey pioneers took place somewhere before the year 2000 C.E. Nonetheless, with ample shoe options in North Dunedin, the modern shoey-er’s ability to select and utilise an appropriate receptacle remains unparalleled in terms of practicality. Further research is needed to finalise these results. If interested in collaboration, please contact our researchers at keegan@critic.co.nz.

Ho, V. (2019) Why the Shoey Could Make You Sick.
Western Sydney University's School of Medicine Gastroenterology