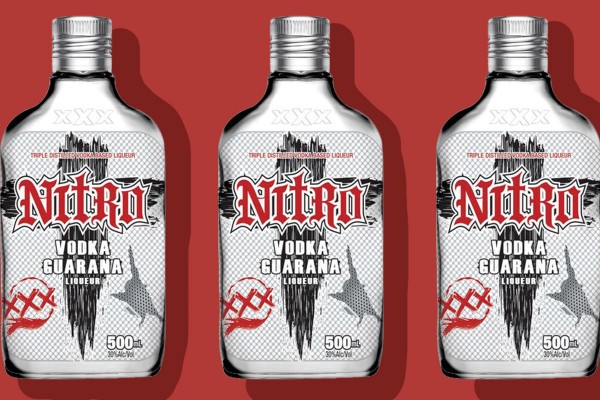 Nitro has always been at the forefront of binge-drinking innovation, but this time they have gone too far. Nitro Vodka Guarana Liqueur hits the shelves this week, and it is dangerous. The drink comes in a 500mL spirit bottle, contains large quantities of caffeine and guarana, and is 30% ABV. It comes in a clear plastic bottle, curved to conform to your body shape. If you rip off the silver label, the drink is the perfect vessel to smuggle into concerts and festivals.

There is something unnatural about placing the words Nitro and Liqueur so close together, I suspect this was probably done for tax purposes rather than an attempt to become classy. The taste is essentially that of weak vodka. A faint chemical edge hints at the heart-stopping levels of caffeine contained within. The drink is meant to be taken in shots, spirit-style, but sipping straight out of the bottle is far more practical in my opinion.

As you drink Nitro Liqueur, several things happen. First, you question what series of events led you to such a low point in your life. Second, you become very worried about the state of your physical and mental health at the end of the bottle. Third, you become extremely, extremely drunk.

In a regular Nitro, caffeine is the main event. Sure, you deliver a good baseline of alcohol to your system, but the experience does not truly come into its own until you follow it up with more alcohol. With Nitro Liqueur, follow-up alcohol is not necessary at all. As you get about halfway through the bottle, the caffeine and the alcohol hit you simultaneously. This one-two combo delivered straight to your brain cells will render you maggot drunk before you can even say: “can I’ve a hoon on your vape?”

Critic has been informed that Nitro Liqueur “should sell for under $20.” Though the back of the bottle deceptively points to 17 shots, each bottle only contains 12 standards. Nitro Liqueur will have to be priced at under $18 to have a half-decent dollars to standards ratio.

It seems the scientists at Nitro, like the scientists of Jurassic Park, were so obsessed with whether they could create such a drink that they never stopped to ask whether they should. Nitro Liqueur is a drink more detrimental to your health than black mould or scurvy. It could be used to strip paint, but it is far more likely to strip you of your dignity. Never before have I tasted a drink so precisely formulated to make someone blackout and do multiple things that they strongly regret. Nitro needs to be stopped.