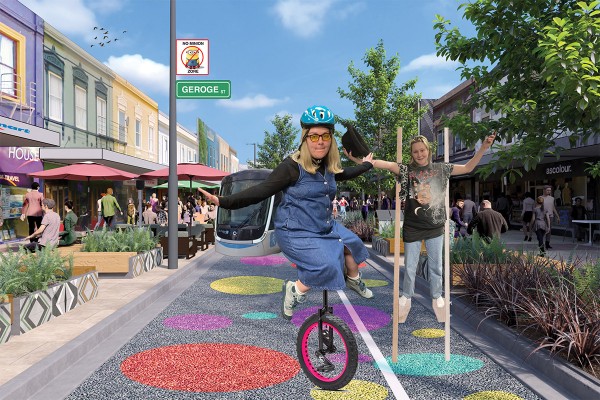 The DCC made a plan for George Street and boomers had a fit about it. We want to present Critic’s plan, which should be implemented immediately to ensure maximum voter engagement at the next Local Body Elections.

There are trams, which are free to everyone.

There will be a 1kph speed limit for all cars.

All food is gluten free and vegan. No real milk allowed. Farms all over New Zealand collapse as a result. Take that Fonterra.

Lime Scooters are back.

There are brightly coloured dots everywhere. No road markings.

All cars have to give way to pedestrians, skateboards, rollerblades, unicycles, bikes, Lime Scooters (not Neurons), stilts, and dogs.

Vaping and smoking are mandated, everywhere, at all times.

From 3am until 6am only boy racers are allowed on the street, to do sick skids and wreak havoc.

There is a one-at a time rule for the entire street. To enter Geroge Street as a car, you have to be certain that no other cars are on the street at the same time as you. This creates absolute mayhem and gridlock (the worst fear of any boomer) meaning drivers are backed up all the way to Milton.

Shop owners are not permitted to ban City Council members from their stores, because every store is now owned by the DCC.

Loud music is permitted at whatever volume at all times. Noise control is disbanded and reformed into a busking ska supergroup.

An alarm sounds whenever a car drives onto the street and people are encouraged to point and laugh at the driver.

There are no retail shops, only online shopping collected from click and collect stores. This include cafes and restaurants.

His Worship Mayor Aaron Hawkins’ office is made of glass and is set above the street, so he can look down on Geroge Street, his creation.

Every time someone over the age of forty walks onto the street they have to pay a wealth tax of 50% on everything they own. This happens repetitively, e.g. if Derek walks onto George Street three times, it takes 50% of his wealth each time.

People enjoy being on the street.

All of a sudden, Sharon woke up. She realised this hellish “Geroge Street” was just a terrifying dream conjured up by those pesky kids. But the one-way George Street was still very real. Gosh, she thought, I’d better write an angry comment about that in Dunedin News.