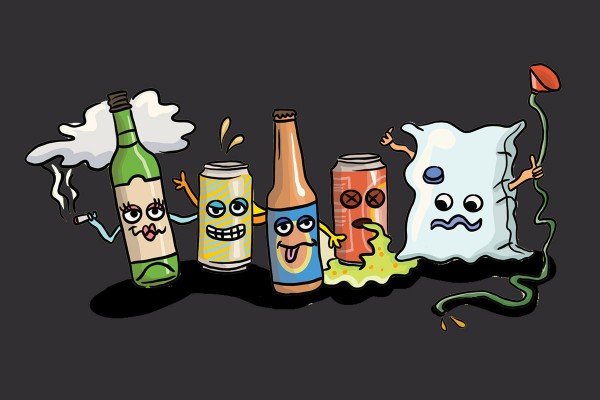 My flatmate’s parents took us to India Gardens on the night I consumed the Deletes. I had been eating fuck all since the start of O-week so I had an absolute feast and was pretty full even after a long walk back to our flat.

Funnels were definitely off the cards, but I started sipping because it was a Saturday night. We were struggling to avoid a food coma. A tack-yak would have come in handy but I’ve always struggled with them and doing it with food seemed wasteful. I soldiered on. They always warn you about drinking on an empty stomach, but drinking on a full stomach can be just as disastrous.

While I was parked up on the toilet in some random flat, I chucked down a few tasting notes. The taste of Cherry Cola was initially good. I’ve never had cherry cola but that’s what I imagine it tastes like. But fuck me, it was hard to drink more than one of them. A bitter taste built up on the back of my tongue. The fragrant cherry flavour got old pretty quickly. The drink started to taste like air freshener. Then, because they are low sugar, I found that the whiskey taste became too strong after having more than one of them.

As I emerged from the bathroom, I was sucked into a game of beer-pong which was the last thing I needed. The guys we played were no-life losers and the crowd was against us because some dickhead kept yelling elbows. I was forced to skull many of my drinks in quick succession.

That brings me to my next point: as a bourbon and cola drink, Cherry Cola is competing with a long list of well-established, classic brands like Billy Mavs and Diesels. Such beverages have been staples of Dunedin drinking culture in the past and are a big obstacle for any drink trying to break into the market. Mavs are known for their skullability.

Skulling Delete Cherry Cola was painful and felt more like drinking battery acid than a beverage. The drink was not very fizzy, but it was far more acidic than other bourbon and colas. The low sugar content didn’t help. Additionally, the standard percentage of a bourbon and cola drink is 7%. Even if you find the taste of a 7% drink shit, you don’t have to drink many of them. Cherry Cola clocks in at only 6%. Combined with the struggle of getting past the fragrant cherry flavour, this made them a huge task to get down. Delete Whiskey Cherry Cola was incredibly hard to drink past the first can. I only made it through 5 of my box before calling it a night and going for ACs.

I got my box of 16 standards at Leith Liquor for $27, which clocks in at $1.70 per standard. That is more overpriced than Absolut Vodka. The boxes are your standard 10 x 330 mL cans.

After the beerpong my enthusiasm for drinking disappeared. I headed back to my flat with my chances of a good night out in a worse state than a dent student’s chances of being seen as a real doctor.

Froth level: the robocop lady that yells “YOU WILL BE ARRESTED” when you ride a neuron without unlocking it

Pairs well with: an empty stomach, being sober on a Saturday night, bombing the toilet at your mates flat