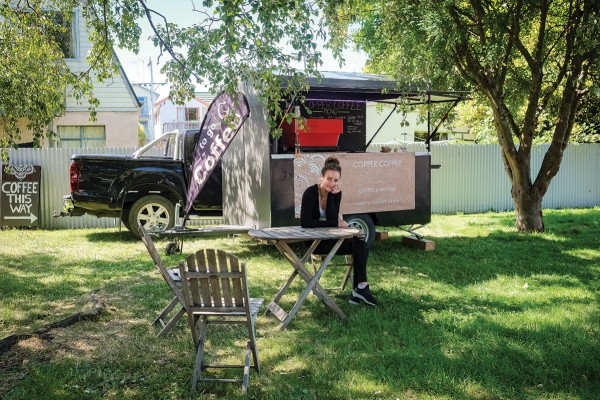 Food trucks are a terrifying concept. You take a whole cafe and squeeze it into a small box on wheels, then drive that box around to different places. Hazel Combs is a student who is out there doing that. She is in the final year of a Politics degree, and decided after the lockdown last year that she wanted to start a coffee truck.

Less than a year later, her business Copper Coffee is up and running. When Critic spoke to Hazel, and sampled one of her excellent flat whites, she was at a cute spot behind Dive. The next day the DCC told her she probably couldn’t use that spot anymore. Running a coffee truck seems unstable and tough.

“I’ve got no idea what it’s gonna be like, I just have my fingers crossed that it’s gonna work out,” Hazel said. She hopes her main market will be students, so that she can set up on campus and go to classes when she’s not making coffee. But the students have not been around until now.

“I don’t know how to balance the truck with studying,” she said. “That is my biggest problem, I’ve got three papers. I’ve got a friend who has alternating lectures to me and can make coffee, so that could be manageable.”

She had planned on setting up a coffee place on campus, rather than in a truck. “At first I was like ‘oh no, a coffee truck is a huge mission’. There’s an [electricity] generator and you have to back it into places and set it up,” she said. “But I was keen to work for myself. I like the challenge of having something different.”

The process of setting up was “daunting”, she said. “You have to have a whole lot of things in here,” she said, gesturing around her. “Like two sinks. A bunch of stuff, tick all these little boxes.”

“The whole process took six weeks,” she said. It was finally complete in December. “I thought that once I got it verified, it’ll would be a breeze. But finding the right location every day is still difficult.”

The coffee is good. Hazel did her training in London. “I was making coffees and I thought my latte art was really good,” she said. “But the lady there wouldn’t send anything out unless it was completely perfect. Your flat white wouldn’t even have been accepted.”

And my flat white was pretty damn good. On the way back from London, she noticed how much money baristas were making in Australia. She ended up working in Melbourne for six months, where she made $26 an hour.

The coffee market in Dunedin is hard to crack into, with heaps of local coffee makers, Hazel said. She wants to focus on events and festivals, like Splore. It’s hard because most events have “pre-established coffee people,” she said. “They’re like sorry we already have a local person doing it.”

“It wasn’t exactly a choice to do a coffee cart, but now that I’ve got it, it’s awesome,” Hazel said. “You can take it to events, you’re not confined to one little spot, you can choose the area.” She hopes to work at festivals, and is excited that she can drive the coffee cart wherever she wants. “If I can have a coffee cart that gets me into events, it’s a win-win.”

You can follow Hazel @coppercoffeedunedin for daily location updates on her coffee truck.