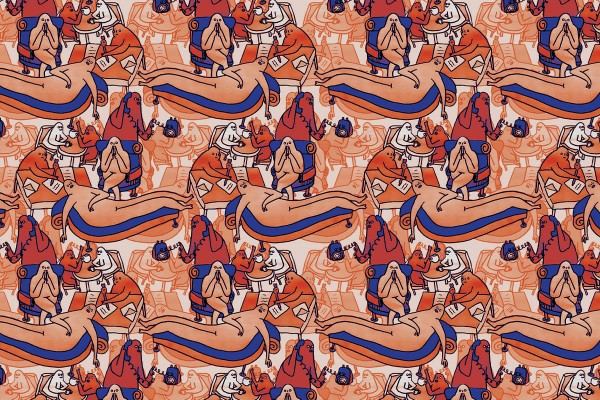 Want to deal with a dick flatmate, problems with your studies, or want tips on how to woo your latest Tinder match? Your anonymous concerns will be addressed by a panel of Critic's life coaches.

I. Need. A gf. I’ve tried several dating apps, I’ve tried striking up conversations with any girl who gives off queer vibes, but the ladies aren’t vibing with me. O wise one, how do I woo myself a woman to spoil and cuddle and keep warm in the winter?

Auntie Ai-ya says: Firstly, be yourself. Work on yourself first, find a hobby, do some yoga, idk it’s up to you. Join some clubs, maybe roller derby, there’s always Sapphics there. Secondly, red lipstick always seems to work for me. Head out in your sexiest lesbian pants and some power red, and some girl outside Suburbia will probably grab you and kiss you. (Oliva, if you’re reading this, text me back xx). Oh, and the bar XYZ has resident queer nights now so maybe try your luck there.

I feel like such an outsider in my hall. Everyone’s found their groups and nobody seems interested in meeting new people. I wanna talk to people about what they’re studying and have interesting chats but it feels like such a narrow minded environment. How do I find my people??

Sarah Tonin says: Try and meet people outside your hall. Sharing the same roof doesn’t mean you’ll share the same interests. Tbh, these friend groups are going to fall apart by second sem anyway, and by then they’ll have signed a BFF forever xx flat and be stuck living with each other for another year, hah. Don’t fall into that trap. Find some OUSA clubs to join.

I've been told I'm a reasonably good looking, sweet guy countless times (flex) but for some reason, whenever I'm around girls I'm remotely interested in, I freeze up. It's like I go from cracking jokes and having yarns with the boys to barely being able to string together a sentence with the girls. A man's out here trying to secure the bag but how do I get over this awkwardness?

Sinbad says: Have you tried just talking to more women? Like ones you don’t want to have sex with? Girls just want to be treated like one of the guys – they want to hear those same jokes and yarns. We’re not aliens, we’re into the same bullshit. Next time you’re with a girl, figure out what latest Netflix show you’re both into and talk about that.

My boyfriend saw my cock and doesn’t want to have sex with me because he hates foreskin. How do I convince him that my foreskin makes sex better, not worse?

Allen D’Generate says: You can’t convince someone to have sex, so if this is their line in the sand, then don’t go getting cut for him. If he likes you, he should like you, foreskin and all. If you think he is worth the argument, then tell him about how your foreskin is full of nerve endings that make sex more pleasurable for you. Not to mention, it is very flavourful and adds a whole new dimension and mystery to your penis.

Nobody puts their fucking takeaway trash in the bin

Sarah Tonin says: Collect everyone’s trash while they’re out and then put it in their rooms. Alternately catfish your roommates into thinking a date’s coming over, so they’ll clean.

Not your dishwasher, 1st Year

I feel like I'm always the one emptying and filling the dishwasher. How do I get my flatmates to do their own dishes without being a bitch?

Auntie Ai-ya says: Honestly, just be a bitch. Set some boundaries. If they’re going to act like a child, treat them like one. Mom voice on, y’all.

Sinbad adds: Do it in person, too, even though confrontation sucks. Even if you send a very reasoned message over the group chat, it’s going to come off shit.

Had a falling out with my flatmate who brags about being a purebred white person. Seriously. They went into detail about breeding and I told them I felt uncomfortable about the words they were using, but somehow is convinced that they are a victim, because apparently me being uncomfortable is an accusation that they are racist (which I never actually said). How do I live with someone like this? Do I move out? I’m so sick of Dunedin’s culture of racism and not being able to call it out. All I do is hide in my room and feel so denied and alienated.

Auntie Ai-ya says: Just move out. You don’t need this kind of negativity in your life. It’s not your job to educate someone on how they are being racist, even though a lot of POC feel as if that’s their burden. They’re obviously a grown person, and if they can’t be bothered to listen to POC that they claim are their friends, then they’re not ready to flat with one. As one POC to another, look out for yourself. Having to explain racism over and over again to someone who is being willfully ignorant and obtuse is exhausting, and isn’t worth your time or energy. If they’re really your friend, they will understand both the need to move out and also realise how their behaviour has affected you in time. If they don’t, be comforted knowing there are plenty of other people out there who would love you as a flatmate, brown and all.

Studylink still hasn't confirmed my allowance. I am so hungry and so poor. What else can I eat that isn't $2 noodles?

Sarah Tonin says: OUSA Student Support have food packages you can pick up (5 Ethel Benjamin Place). Also, the Polytech has a community vegetable garden that you can pick from for free. There’s lots of roosters in the peninsula, and duck eggs in the Botans. If you’re brave enough, you can dumpster dive. You can try and bust into a hall for free. Also go to Māori Hill and steal from those people, they’re so rich, they can just eat their money. Eat the rich.

Really want to start fokin’ around but I’m shy

I am a girl. How do I get intimate with a girl when I’m not drunk? The most I’ve done is make out both sober and when drunk, but girls terrify me so I have never been able to do anymore. TIA x

Both of my exes cheated on me which led to a lot of mental health issues. I was in therapy but I have been discharged as I am betted (yay!). One main issue that I am still dealing with is that I can't trust anyone, including my current partner. He's an amazing guy and tried relieving my anxiety by saying "you have to trust me when I say that I would NEVER cheat or disrespect my partner like that" but my exes also said similar statements and they still lied and went behind my back. They were both long-term relationships and I invested so much in them but still ended up getting hurt. Now I have this dilemma and cannot seem to believe anyone when they say they won't ever hurt me. Maybe I shouldn't be in a relationship with this ongoing issue but I ended falling over heels with this amazing guy who treats me with mad respect. I really want to believe his words. To anyone that have experienced with trust issues, how did you deal with it? How can you tell if someone is being genuine?

Auntie Ai-ya says: If your current partner wants you to trust him and understands your past, he will work through these issues with you. Just tell him “I can’t trust you yet, but that’s not your fault, and I’m working on it.” And if he is a genuine guy, he’ll understand and be there for you while you regain your ability to trust. Just make sure you’re communicating openly and check in with each other. Also, remember that you have value whether or not other people have treated you as such.