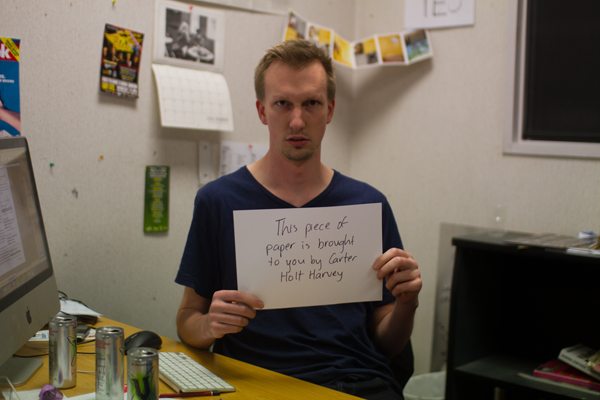 Throughout the week, I have been constantly pestered by Frodo*, one of Planet Media’s effervescent account managers, into selling Critic’s contents page to one of his advertising clients. I told him to fuck off, but what Frodo lacks in height, tact, and common sense, he more than makes up for in whorish devotion to his clients. I eventually relented and offered him the next best thing. This week’s editorial is brought to you by Lynx Africa: the deodorant that will make women want to have sexual intercourse with you while holding their nose.

As a wiser man than myself once said, “themed issues are so 2012.” But they do make coming up with an editorial topic easy. Last week, I got lucky; this week, I’m struggling to weave a common thread through our feature articles. If there is a theme to this week’s Critic, it’s “Amateur Hour.” The derogatory connotations are, of course, not what I’m going for here; rather, each of our three lead features is brought to you by an unpaid volunteer. The volunteers, meanwhile, are brought to you by Spam: putting dead animals into little cans since 1937.

On page 24, I continue my somewhat unforeseen detour into the realm of SPORTS, joining forces with SPORTS provocateur Gus Gawn to preview the upcoming Champions League final. And on page 26, Fertile Myrtle tells the story of her egg donation to an infertile couple she met online.

All in all, it’s been a pretty fucking hectic week, what with checking Facebook, deciding on this week’s theme, securing corporate sponsorship for issue 13 (The Sellout Issue) and, in true Critic fashion, leaving it to the last minute to finish off my editorial. I leave you with some words from our new sponsors, Lord of the Rings:

Frodo’s love for Gandalf rose above all other thoughts, and forgetting his peril he cried aloud: “I’m coming Gandalf!”