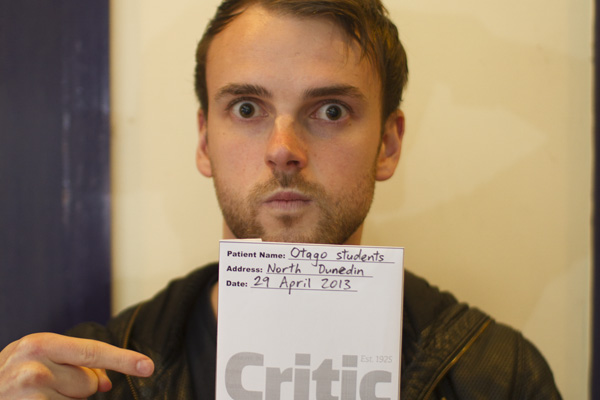 As you may have noticed, the cover of this week’s Critic is adorned with the mugshot of a criminal. He probably stole some pharmaceuticals.

Damn that’s a smooth segue. Let’s talk pharmaceuticals. Not in the context of ranting about Big Pharma and how they’re conspiring to get the world addicted to antidepressants. Let’s talk about why prescription drugs should be freely available for all to consume.

Pretty much all Critic readers know that recreational drugs should be legal. That topic has been done to death, move on folks, nothing to see here. But for whatever reason, people don’t get as passionate about liberalising prescription drugs.

The system for obtaining prescription drugs in NZ makes sappy social policies like “Warm Up New Zealand” and “Milk for Schools” seem like Rob Roy Dairy-esque value for money. A friend of mine has had asthma since he was five. Every two months or so, he has to pay for a doctor’s appointment to get a repeat prescription for his inhaler. “So, still got athsma?” Yep. “Okay, I’ll write a prescription. $90 please.”

All prescription drugs should be available at supermarkets (with the possible exception of Countdown, whose customers cannot be trusted to purchase even a punnet of Talley’s marinated mussels without committing a litany of antisocial acts.) If you’re into legalisation of drugs, you logically must be into this too.

The sacred wax seal of a doctor should not be required to buy prescription drugs, like a permission slip from your parents letting you go on a class trip to a swimming pool. The present system is dehumanising and authoritarian.

Doctors should be limited to a purely advisory role, helping people select which drug is right for their situation. The doctor should provide his expert opinion, then let the resulting informed consumer make up his own mind. Some doctors realise that this is their proper role. Unfortunately, many doctors believe themselves to be the infallible founts of all wisdom, and that People Must Be Protected From Their Own Decisions.

In Auckland over the summer, I attempted to get a repeat prescription of some drugs, the risks and benefits of which I was exceptionally well-informed about. My regular doctor was away for the Christmas break, so I went to a different guy. He claimed that the drug was dangerous and not in vogue among the medical community, and his clinic had a blanket ban on it. He refused to prescribe it.

“You’re a law intern,” he said. “If you strongly advised a client not to take a course of action but he still wanted to go ahead with it, would you just go along with it?” I informed the guy that lawyers are obligated in that situation to do exactly that. Eventually he offered to waive the charge and an hour later I found a different doctor to rubber-stamp the prescription.

The insufferable arrogance of the medical fraternity eclipses even that of Studylink call centre operators. Patients are subject to the quirks and personal preferences of each individual doctor, each of whom subscribes to a different school of thought on which drugs are good and which are bad.

Some doctors are fine with benzos, others regard them as the scourge of modern society. For every doctor who respects dermatologists and chiropractors, there’s another who calls them scam-artists. Otago students may be familiar with “Alcohol Guy” at Student Health, who earnestly suggests giving up drinking as the solution to every medical problem, including a persistently bruised toe.

Consumers have to waste time and money bouncing around from doctor to doctor until they find one who doesn’t have some weird thing against the particular drug they want.

Many doctors treat people as single-celled amoebas in a lab, for whom there is only One Possible Right Decision for their health. But people are not lab samples. They’re human beings who are free to make their own decisions. Fuck the doctors who say otherwise.