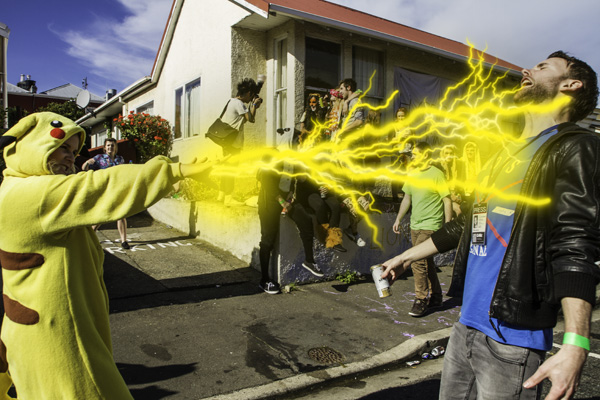 8.30am – Arrived at Allpress for all-important coffee. Refused to reveal who wrote the “Cutest Barista in the World” letter in Issue 06. Critic always protects its sources.

9am – Downed some beers and novelty shots outside Leith Liquor with the Critic team to “take the edge off.”

9.30am – Saw OUSA President Francisco Hernandez wearing an “Are You OK?” t-shirt. Asked him if he was okay.

10am – Several irony-loving students successfully climbed a fence into the backyard of the “Hyde Street Security Prison” flat. One incompetence-loving student climbed the fence into Eureka, which was acting as a police HQ.

10.30am – The Hawaiian Hyde-Away flat told me they had four carloads of sand in their driveway. “My duvet will never be the same.”

11am – Someone threw a can at Fran and broke his glasses, obviously misinterpreting OUSA’s recent appeal for foodbank cans.

12pm – Asked Fran how many people had asked him whether he was okay. “Hundreds,” he said, shaking his head wearily.

1.20pm – Entered 14 Hyde Street to take panoramic photo. Informed that the residents of the room overlooking the street were having sex and would not open the door.

1.25pm – Flatmates burst into the room. Male occupant: “If youse cunts don’t get out in five seconds I’m taking my fucking shorts off.” Five seconds passed, shorts were duly removed. “You like that, huh?”

1.40pm – Residents demanded group photograph. Two out of five pairs of shorts were once again removed for the shoot.

1.47pm – Fight broke out, male resident struck in testicles, clutched them in agony. “I hope you didn’t get me in that shot bro, my balls were showing.”

3.30pm – Informed that Fran has told everyone that this the best Hyde Street ever, repeatedly prefacing this with “Word on the street is…”

4pm – A resident tells me that a girl who had both arms in a cast was pushed down some stairs. “Other than that it was a good day.”