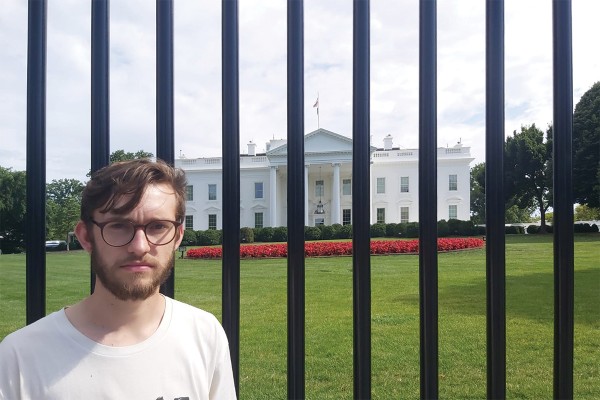 Editorial: I went to the US and it was a fucking shambles

I got to go home to the States for the first time since Covid broke out. And lemme tell ya, things are not going well. Nothing summed up the trip better than a lady in Des Moines, Iowa, who told me how the election was stolen and then followed it up with “oh but I love New Zealand, the Swiss Alps are so beautiful.” Two equally intelligent lines of reasoning.

What else? Well, I spent a night in a shack in Michigan, complete with hand-painted portraits of Trump, and a family who was touting their son’s recent baseball state championship – before clarifying that he was “really more of a cheerleader”. The night ended when the about-to-be-married son told his mum that “it’s not my fault that my wedding is gonna be more fun than your marriage ever was”. Yikes. Then I got driven home by a drunk guy who told me that he got his second DUI on his way to the courthouse for his first DUI.

I drove past Lake Mead, which is at its lowest point ever. Water emergencies are being declared, because surprise, surprise, humans mismanaged their environment for corporate interests and unnecessary expansion. It’s great to watch as the rushed decisions of the 70’s finally come home to roost. I, for one, can’t wait for the water wars to start.

I learned that one of my relatives doesn’t believe blacks and whites should mix because they’re “different species''. I was at the Supreme Court during the overturning of Roe v Wade, and the mood was exceptionally grim. I was there when the government clarified that police have no legal obligation to protect you. Now we’re watching as the Secret Service deletes their text messages and the government descends into theologist fascism. There was legal weed everywhere, which made the situation a bit more palatable, but it felt like it was just there to pacify the masses while the robber barons squeezed out their final dollars. The USA is filled with brilliant minds, vibrant culture, and awesome scenery. It is controlled by religious zealots and billionaires. I have no hope for that country.

And yet, New Zealand isn’t making it easy to stay. I’ve been here for four years, and it’s only getting more expensive. Ten dollars for tomatoes? Fuck off. Aotearoa was just voted the second-worst country for immigrants, second only to Kuwait. Jesus. It’s almost impossible to get a visa here if you’re not loaded, and if you have any medical conditions, you can just forget about it.

Going home did make me realise how accessible politics are in New Zealand, which is great if you’re a Kiwi. You can actually make a difference here. In the States it feels like a lost cause. Aotearoa has its problems, but it’s nothing compared to the good ol’ USA. So, for any Americans who’ve just made it over this year, stick around while you still can. The world’s falling off a cliff, but at least the view from New Zealand is pretty.