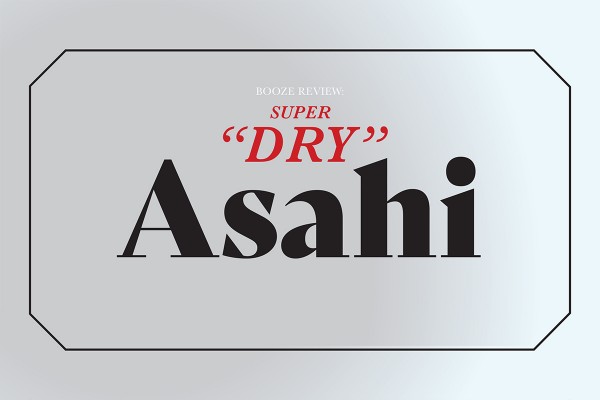 Asahi Super Dry is a very nice beer. “Asahi”, you say, “Isn’t that the enormous multinational that owns just about anything that you can put your lips around? [insert dick joke here]”. Why yes, yes it is, fictional booze review enjoyer, but that is not to say we can’t enjoy things. Asahi owns 50 percent of NZ’s $1.6 billion alcohol market and Asahi SD tastes exactly like the flagship beer of a super-corporation should taste: clean, predictable and slightly bitter.

Now this can be confusing, because Asahi owns a large majority of the drinks that you can buy in NZ. From Peroni's to Cruisers to fucking Woodstock Bourbon and Cola, all fall beneath Asahi’s extensive umbrella. But Asahi Super Dry is the OG, the original sin, it is the beverage that allowed a quaint Japanese beer titan to transform into an international market-eclipsing monster.

The packaging is sleek and simple, a mix of Japanese and English makes it just the right level of exotic, the silver colour shines like a brand-new Lexus. The label always falls off when it gets wet, hinting at the treacherous allure of money and power: a metaphor for how the corporate facade of big business will always shed off of a bland and ultimately translucent underskin, ready to shatter at any point given the right encouragement. The dryness is the best part, and there is none of that carby sweetness that other beers have. Every sip is equally refreshing but at the same time leaves you wanting more.

You would think that although owning 50 percent of all of the alcohol we know and love would make Asahi power crazy and allow them to price gouge alcohol, but there are still enough competitors for Asahi to gobble up that we don’t have to worry about that for another five years at least. It is also why a box of Asahi Super Dry can go for as low as 22 dollars at the supermarket, coming in at 1.4 dollars per standard, a typical price for beer these days.

Overall, Asahi Super Dry is a fine brew. The recipe has no doubt been perfected by years of consumer panels and blue skies research to encapsulate everything which makes anyone enjoy beer. Asahi will probably soon acquire the entirety of New Zealand to serve as their global mega-brewery, so why not get in your new overlord’s good books now by buying their classic brew?

Tasting notes: crispy, refreshing.
Froth level: getting a hotel on Mayfair in monopoly.
Tastes like: success, money, power.
Rating: 9/10 Asahi please employ me when you take over the country xx.