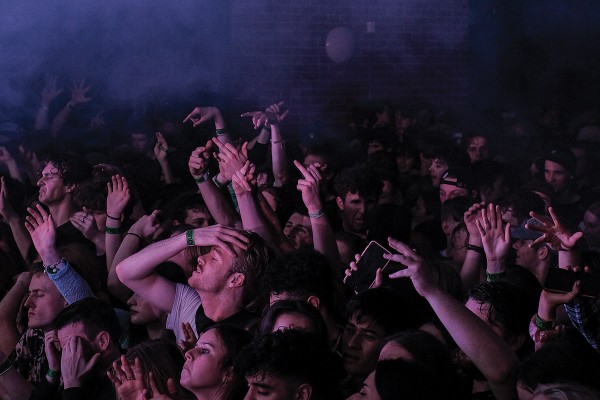 Six months ago, we asked O-Week freshers what the biggest problem in their life was. Most of them said that their biggest problems were making friends, missing family, or other social issues. Critic hit up the line outside Union Hall on 14 July to check back in, and see if anything had changed. One thing we noticed: The more guys were in a group, the more likely that “dick size” was their biggest problem. Because only the straightest of men feel the need to remind their mates how big their cock is.

So: What’s the biggest problem, in your life, right now?

- Are you interviewing first years? Because I’m a third year. Woah, actually, that is my biggest problem: I look like a first year and everyone thinks I’m gay. Like look, genuinely, it’s problematic. I was recently talking to my friends at a party and they all thought I was gay. And that was a year and a half into this degree. But look at me, I mean, I get it. But I’m neither of those things. But I get it, man.

- My biggest problem in life is cooking. It’s a big problem for me. I don't know how to cook. My go-to? Spaghetti. Just spaghetti. Not even chicken. I’d like to learn anything quick and tasty. Huh? Stir fry? I don't even know what that is. Oh wait, I tried that once. But I burnt it. Not as easy as you make it sound.”

- Me? It’s having a girl that I like but being too chicken to ask her out.

- Cock size, bro. It’s so shit. Sometimes you’ve gotta tie it ’round the waist, make a belt, sometimes it dips into the toilet. You sit down to take a shit and your dick’s just submerged. I try to tell people about this but they just laugh at me. It’s nice to find a journalist who takes this seriously.

- Boys. They’re obviously the biggest fucking assholes. Boys are just always assholes. Always. My tips? Just hook up with as many boys as you want. Don't sleep with them, just hook up with them, and then they’ll like wanna come home with you, and you can be like ‘nah’. You leave them wanting it. They’ll be, like, so turned on and you’ll be like ‘fuck off’.  Yeah.

- My DJ neighbour next door. He’s a DJ and he plays at 2pm on a Wednesday in UniCol and it fucking sucks. I’ll start crying for the interview, if you want. Oh you're not videoing? Because I can pretend to cry. His name is DJ Platt Platt and he plays terrible music. Please put that in. P-L-A-T-T.

- Um, I failed all my semester one papers. And I wanna buy coffees every day but I can’t afford it. And deciding what I want to do with the rest of my life while being this young. It’s a bit hard when you’re 18. Do I look geared? Can you tell I’m on gear?

- I just broke up with my boyfriend, so that’s probably mine. But there are worse problems. I’m here, I’m fine, I’m living. I mean also like world peace and all that, but for me personally, probably money or relationships. I think you just gotta be confident and make friends. If people don’t like you, that’s their problem, and you’ll find people you like.

- Mental health’s pretty full on. I guess just stay consistent, though. Do what you enjoy. Sometimes you feel low and lose motivation though. But eventually you recycle and get back into it. Just be proud of yourself. And don’t hurt yourself.