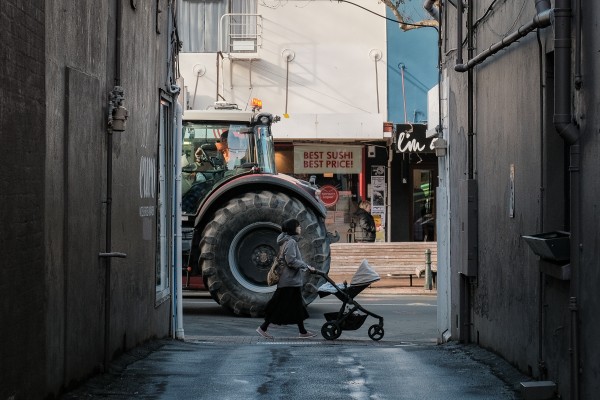 Counterprotestor Injured at Groundswell Protest is “Disappointed” in Behaviour

The Dunedin woman whose sign reading “NO FARMING ON A DEAD PLANET” was ripped from her hands by a Groundswell protester says she is “disappointed in their behaviour”. Groundswell Convenor Bryce McKenzie claims Groundswell is "not responsible".

The counter-protester, Alenna McLean, says she was injured when her environmental sign was ripped away by pro-farming protestors in Dunedin today. She held a one-person silent protest in the Octagon, until the sign was ripped from her hands by a supporter of the Groundswell protest. The incident was captured on film by the ODT.

Alenna was at Groundswell to counterprotest, standing at the centerline of the Octagon intersection outside Night ‘n Day. “I just held my sign above my head. Everybody could get past me easily,” she told Critic Te Arohi. “I wasn't blockading. I started being jeered at and yelled at by the farmers’ supporters. I didn't respond verbally, because I was doing a silent protest. My sign said it all.”

Alenna told Critic that the protest was abusive, with protestors making offensive comments to her, right from the start. She said she was being yelled at by the crowd and a Pākehā woman approached her and swore, before holding her sign in front of Alenna’s sign. Alenna moved to the left but “she continued to yell at me.”

The protestors kept approaching her, and a “rather tall Pākehā male” ripped her sign away. “I'm very short,” Alenna said. “He started yelling at me, and the woman that had first approached continued to yell at me, then he grabbed my sign.”

She said her hand is now injured from the altercation. “I’ve got a bit of a bruise. [He] bent my fingernail backwards. My fingernail’s going blue and black.”

She said “the crowd cheered” as her sign was ripped away and destroyed. “Then somebody else came up and just put a sign in front of my face”, while people continued to gather to yell at her.

“I know what all of the press releases have been from Groundswell. And I know what the rules are for the protests. One of the primary things in the new press release about how they want their members and their supporters to not look like rednecks.”

Alenna said “I was pretty thrown at the whole situation and my hand was hurting. I still had two people holding signs in front of my face,” she said. “I say, you know, ‘one of your goals today was to not look like rednecks. How's that working out for you?’”

Despite the video of the incident, Bryce McKenzie, one of the National Convenors for the Groundswell protest said “we're not responsible. We wouldn't condone any victimisation of anybody. We just do not condone that.”

Bryce did not think the rhetoric of “New Zealand is a great place to live, it is worth fighting for”, displayed on Groundswell’s website, would have contributed to the heightened tensions at today’s protest. “I don't think I've ever heard that used by anybody in Groundswell, and it certainly hasn't been used by anybody on the committee,” he said.

When Critic pointed out those words are on the same webpage as his contact details, he said “I think that was a reference to our ancestors fighting in the war.”

The Groundswell crowd continued yelling at Alenna after the incident — “nothing intelligent, just swear words” — and Alenna left the vicinity. She knew she was going to “get a bit of flack”. But she says she hadn’t anticipated exactly how much vitriol her one-woman protest would attract.

“I was doing a silent protest with one sign. I’m a five-foot-two woman. I wasn’t blockading, I wasn’t yelling, I was silent.”

“There were so many of them and only one of me. I wasn’t stopping them from protesting — I was simply standing with a sign.” She said the crowd, which contained women and children, was overwhelmingly Pākehā.

Alenna says she feels “sad” for the Groundswell protestors. “I’d just like to say how disappointed I am in their behavior, and how unnecessary it was. And it really doesn't further their cause to get the public onside, to behave in such a despicable manner towards one person who is doing a silent protest.”

“They have such a sense of denial, lack of insight, lack of future thinking, lack of guardianship for the land, the whenua, and [its] that they are so blinkered in their thinking.”

Alenna is involved in Extinction Rebellion, and decided on her silent protest as an individual action in order to stand up for her beliefs without interfering with the farmers’ rights to protest. “I knew that it would take a certain amount of courage for me to actually do that. But I decided that it was more important for me to garner that courage rather than do nothing.”

“My goal for today was to have one sign that countered the argument that we can bury our heads in the sand and go on with business as usual. And I achieved that goal,” Alenna said.