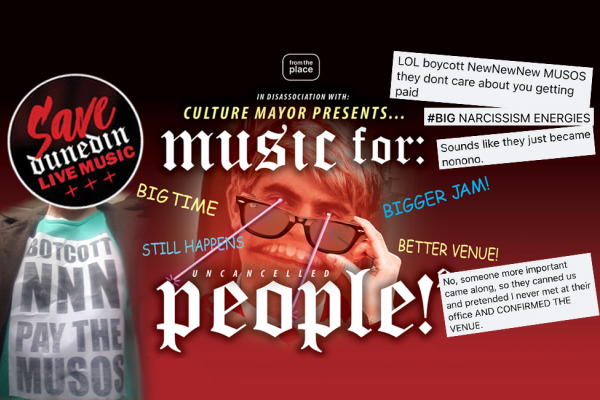 Starters steps up to save songs after sordid stoush in sound industry, culture mayor fails to step in

A very public falling-out between a venue owner and a local artist on Facebook has seen Starters stepping up to the plate to save the Music for the People gig, which is taking place this weekend.

Person Will, Music for the People’s organiser, put New New New founder Ian McKinlay on blast in the Dunedin Music Facebook after the brewery confirmed they could not host the gig. Will covered a past history of the brewery’s alleged misdeeds against musicians.

The comment thread, while either an unrestrained joyride of self-destruction or a masterpiece of viral marketing depending on who you ask, is far too long and passionate for Critic Te Arohi to reprint here. Will’s post announcing the uncancelled gig, which is now being held across two days at Starters and St Paul’s Cathedral, attracted a landslide of comments sharing stories of poor experiences with NNN. This caused Ian to log on and post a lengthy response defending his brewery’s reputation.

According to NNN’s general manager Tom Koykka, Music for the People was only ever pencilled in and was never confirmed. “It fell out of everyone’s head,” he said. Ian agreed. “From our perspective the gig with Will was never booked,” he said.

The goal of the Music for the People gig, which is spread across two days and features 32 bands, was to “get Dunedin Musicians paid” and to foster a sense of community. According to Will, he initially went to Ian with the project to give him a chance to “engage with the music scene in a way that would provide good optics for him and would provide something for us.”

The friends of about 20 years found their relationship hitting the proverbial fan when Ian pulled the pin on the gig. “For me that was like the grand finger to the face, in the spirit of you’re not helping us, but you’re going to shit on this whole group of people that aren’t really getting looked after all that well in this town,” Will said.

Ian claims he did not know the gig was going ahead until he was alerted to Will’s promotional material, which features Mayor Aaron Hawkins depicted with an upside-down mouth, Raybans and lasers shooting out his eyes. “I think Will has taken it very personally. I think he feels hurt by me,” said Ian.

Will said “I do have a vendetta against [NNN], but I did try to present it in a way that didn’t seem as personal as it may have. It also was warranted. I like to think I’m doing the right things with this event to counter some of the things that happened with the whole NNN blowup.”

Tom, NNN’s General Manager, said that “in modern times there’s too many ways to communicate. I find as a human you lose things because there's 20 different ways to communicate and some people only communicate with one channel versus another. There almost needs to be a unified communication method going forward as a society.”

Will also claims that NNN failed to pay musicians from a gig that took place pre-Covid, and that only after being called out has the venue come forth with the promised vouchers for the bands.

Ian blames “a lot of poor communication” from both sides. He said Will fell out of contact for a year, while NNN failed to follow up when another function was confirmed for the coming weekend. He said NNN now has “a better calendar” and since the gig last year, new management have been continually raising their game.

The cancellation from NNN came at a time when Dunedin musicians feel themselves under pressure from noise control. The pressure was sparked with the cancellation of a Marissa and the Dandelions gig at Dog With Two Tails on 9 April by a zealous noise control officer, presumably named Horton, who could apparently hear the music from the Meridian Mall carpark.

Two student acts who were recently hit by a similar issue will be playing at Music for the People. At a flat show sending off Sign Up Club on 28 May, noise control shut down a set featuring two acoustic guitars and vocals. The flat was served an abatement notice, meaning that “if there's any more noise, gear could be seized and you have to pay a fine to get the gear back with police arriving to forcibly take it,” said Jack McRae, the drummer from Man Ray. “It’s very expensive.”

“It was pretty ridiculous,” said resident Keegan. “Everybody just thought it was a pretty big buzzkill because it was so early in the night. There was another band and a DJ lined up and they just couldn’t go on, which was really disappointing.”

“The DCC are like this sort of omnipotent beast that hovers above,” said musician Alex Dyke, who helped to organise the gig. “We can get OUSA onside, and we can get Campus Watch onside, and we can get the police onside through Good One.” However, there are few options if you want to work proactively with noise control.

NNN said noise control was a problem too. “It's definitely a problem and we’ve had that issue in the past too,” said Ian. “It can obviously shut things down pretty quickly and gets you a bit scared to do late at night things.”

“We’re right next door to Animates and there were a couple of cats that were post-op in their cattery that were being disturbed by our music so we adjusted the sub down a little bit,” said Tom.

Fortunately, despite all the drama, Starters was around to save the day. “The big thing for us is that we want to try and promote the local music scene and get more bands out there, and just push the fact that there is some real talent out there in Dunedin. We want to see them survive. We’ve got a venue here to use, and I want to use it as much as we can,” said manager of Starters Jason Marshall. “It should be a good night.”

“I’m feeling really excited to be honest,” said Jack, who drums for both the Slinks and Man Ray. “I’ve never played in a church for original music. It should be really exciting to see the other bands.”

You can catch the Slinks at Starters on Friday 11th, and Man Ray at St Paul’s Cathedral on Saturday the 12th (afternoon show), where Alex Dyke is also performing. A whole stack of other bands including Calla, Flyspray, The Rhododendrons, Marissa and the Dandelions, and Black-Sale House will also be performing at these venues in the Music for the People mini-festival.

Get tickets to Music for the People at www.fromtheplace.fun or buy them at the door.