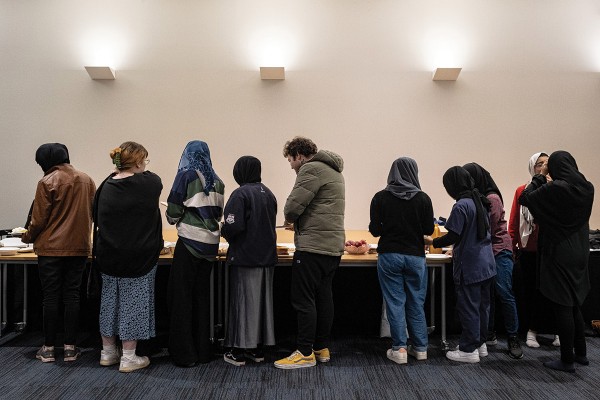 What Ramadan Means to Muslim Students at Otago

It’s not always about free food, it’s about the values of Ramadan

Ramadan is here from 12 April to 12 May. Muslim students here in Dunedin observe the Islamic holy month by fasting from dawn and congregating together at sunset to pray and share a meal.

This year, the University of Otago Muslim Students' Association (MUSA) is organising daily Iftars (meals after sunset) for students at the prayer room in the University Union building. It is the first year that MUSA has organised Iftars. MUSA decided to step in when the Otago Muslim Association announced that they would not provide daily meals for breaking fast.

“After our first day, we were approached by different people, asking about how they could contribute and we felt so overwhelmed as we thought that this plan would only go on for a short time, but as time goes by, we are continuing it,” says Farahiya. Non-Muslims are also welcomed to enjoy the meal.

“To [MUSA], this is one way of meeting Muslim students around the campus and making sure that we could help our community have a good Ramadan and not feeling alone during this special month,” says Farahiya Husna who is also the Vice President of the University Muslim Students Association.

“We heard that students were sad after the announcement and we took that seriously and felt that it was our time to help ease some burden off the students throughout the month,” says Farahyia. Since the start of Ramadan two weeks ago, MUSA has been approached by different donors, some deposited money into the association’s account, some even volunteered to cook for the day.

But Ramadan is more than just fasting. Critic sat down with five Muslim students and asked what Ramadan means to them.

“I am in love with Ramadan,” says Rawaa Elhanafy, a third-year Pharmacy student. “Some of my friends think it’s weird of me to get excited about fasting for the whole month.”  But to her, the holy month means it is a time where she could “relax” and be closer to God. “It just means that any free time I have, I will devote it to spending as much time reading the Quran and praying, and that brings peace to me,” says Rawaa, who originates from Gaza, Palestine.

For siblings Taskeen Fatima and Faiqa Fatima, who are in their first year and second year of Food Science, Ramadan is about seeing the world from a different perspective. “It is the time of the year where we put Dunya [world] matters aside and take a deep breath and ask ourselves have we been good Muslims and what can we improve in the future,” says Taskeen. Faiqa also added that Ramadan brings a special feeling that is hard to describe. “Every Ramadan, I realize that we as Muslims are encouraging one another to become better Muslims by praying and reading the Quran together,” says Faiqa.

Third-year Medical student, Farahiya, feels that Ramadan is about being with each other and managing time correctly. “To me, Ramadan has always been about having friends and family by your side, breaking fasts together, going to the mosque together. I have not been alone during Ramadan for a long time and I am quite lucky that I could come to the prayer room here every day and break fast with friends,” says Farahiya,

George Lethbridge, a second-year Geography and French student who converted to Islam two years ago, feels that the month is like a reset for him. “Throughout the year, you get so distracted and so worked up with work or assignments but this month allows me to “reset” and focus on myself and the religious aspect of my life,” says George. He also finds that fasting in Aotearoa New Zealand is not as tough as in other countries.

“Our fasting period is not as long as other countries. Plus, with the weather that we have been having, there is nothing I can really complain about,” says George.