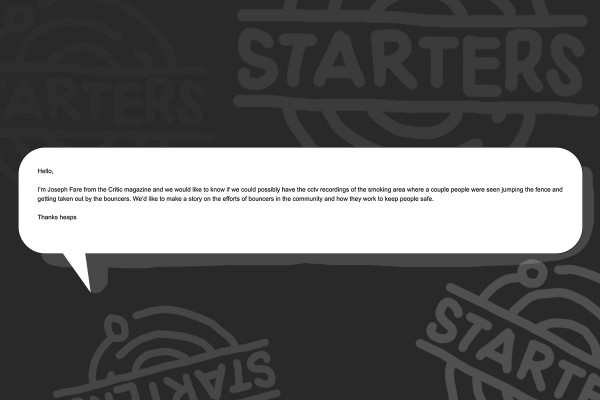 Impersonating Critic More Difficult than Getting a Job at Critic

I’m Joseph Fare from the Critic magazine and we would like to know if we could possibly have the cctv recordings of the smoking area where a couple people were seen jumping the fence and getting taken out by the bouncers. We’d like to make a story on the efforts of bouncers in the community and how they work to keep people safe.

This email is what a group of tricksters sent to the Starters email account.

But Joseph Fare is not a Critic reporter. In fact, he’s not even a real person.

Joseph Fare is one piece of an elaborate ruse constructed by five very crafty breathas. On 27 March (a Saturday night), Kev D Don and Malz Whare were hauled by the scruff of their necks from Starter’s Bar. The boys were two of five members involved in a failed fence-jumping attempt that would lead them to pretending they work for Critic.

Wanting to relive the “very dusty night”, the boys decided to email Starters to get CCTV footage under the pseudonym Joseph Fare, who claimed to be a reporter for Critic Te Arohi. Starters forwarded the email to OUSA, who forwarded it to Critic, saying “no, you can’t have CCTV footage, that’s a breach of privacy.” Critic was like “wait, what? We never requested this. Who the fuck is Joseph Fare?”

So we did some sleuthing. We found “Joseph’s” Soundcloud, and then his Facebook, and within an hour, Joseph and The Boys™ were sitting on our couch ready to relive their fraudulent exploits. They gave us the full yarn of what happened that night.

“We couldn’t be bothered waiting in the Starter’s line,” explained Kev. So him and The Boys decided to sneak in. “Most people jump the fence,” he explained, “so we thought we’d take the sneaky route and just jump the roof, aye.”

Some girls on the balcony of the upstairs flat showed them “the good spot” to jump the fence. Like a group of munted meerkats, The Boys stuck their heads above the fence, scanning the crowd for a good opportunity to sneak in. “I was like fuck it, this is our time,” said Kev, “and I hopped over.” He was immediately tackled by security. Not seeing security deck his mate, Malz followed Kev over. “I landed on my back and as soon as I got up I was on the ground again.”

Kev and The Boys hold no grudges against security, who dragged the two out, scuffing them up a bit on the way. “While they were draggin’ us out we were like yeah right, fair play,” said Kev. “Security’s doing a good job aye.”

Josh didn’t hop the fence. He’d seen what had happened to his two partners in crime, and backed off with “the Bro Tom.” The last man, Lukey, was successful. “I wasn’t at Starters at the time, but I heard “yo The Boys are on the roof”, so he made his way to the bar to join. “I got to Starters and saw how long the line was, so I just waited until security wasn’t looking and just walked right in the front.” Everyone could have just done that.

Lukey was eating his munchies when he saw two boys getting dragged out. “I realized, yo, that’s Malz and Kev, I know them,” said Lukey. He didn’t intervene. “We heard people cheering as we got dragged out,” said Kev. “We were like yo, nice, but then it turned out they were cheering for security.”

The Boys aren’t keen to repeat their adventure, and don’t recommend their route to others. “After what happened”, said a scratched-up Kev, “we’re happy just sitting in line next time.”

The Boys do know how to write a convincing request for comment, though. If their cat-burglar career falls through, they may make for excellent journalists.