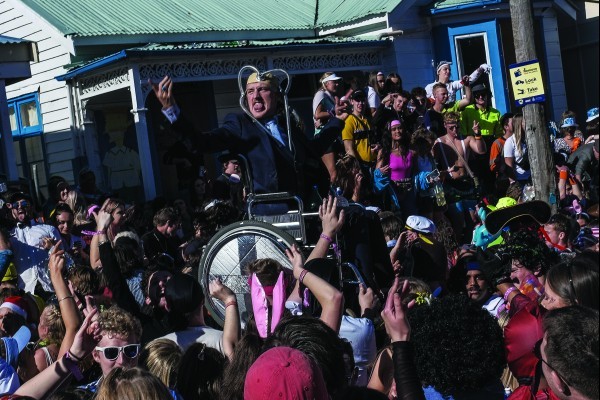 What if we just linked up a few UE Booms for Hyde and played darude sandstorm on repeat?

A Hyde resident was surprised to discover that OUSA does not fund the music or staging at the Hyde Street Party. Organising the DJs and music is left up to the residents.

“Imagine the party without music,” Amelia said. “I was astounded.”

OUSA’s CEO, Debbie Downs, said that the “Hyde Street event requires an enormous amount of resourcing from OUSA, the cost of which is substantial and mostly includes safety and security measures”. She said that OUSA has “never programmed any entertainment or covered the costs of staging/production for flats”.

“No flat is under any obligation to provide entertainment, the number of DJs on the street changes every year depending on what residents want for that year,” Debbie said.

Amelia said that the Hyde residents were contacted by an event organiser who explained how the funding usually works. “Basically they said we run it and we provide everything to do with music and private security for the guys who are on stage. I think it’s morally not right that OUSA take credit for the party without providing the music or helping the event organisers,” she said.

After Critic spoke to Amelia, she sent us a screenshot of a message from one of the event organisers who help the residents with music. “Looks like we jumped the gun a wee bit”, the message said. “We’ve just been informed by OUSA that they’re going to help us out with the stage/sound system this year to make sure everything runs as smooth as possible.”

Amelia said she was “happy that the guys (DJs/organisers) are getting help from OUSA”.