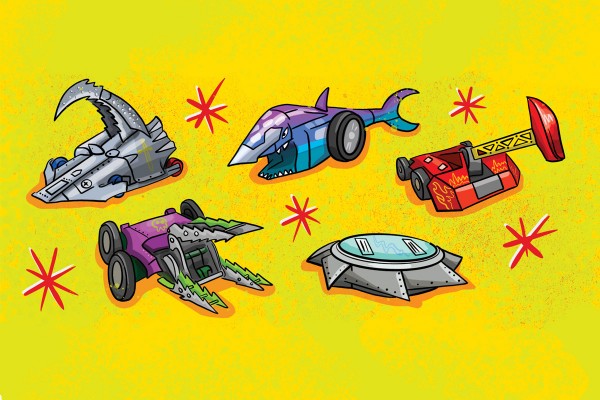 DIY in our DNA ruled as unfair advantage

The University of Auckland's Faculty of Engineering have successfully won the most recent Battlebots season, which many fans consider the world championship league for robot fighting. Their winning robot was a heavyweight champion called Endgame.

Battlebots is an American TV show where teams engineer a small robot, designed to destroy other robots in an enclosed arena. Having aired from 2000–2002, and again since 2015, Battlebots is probably the most radical sport known to man.

It's like that episode of The Simpsons where Homer pretends to be a Robot by riding a tricycle and wearing a postbox and bucket. But these robots aren't animated, and are equipped with hammers, saw blades and flame-throwers.

A local Battlebots fan told Critic "any machine featured in all [nine] seasons of Battlebots could easily kill a man on sight … [the competing robots] are works of art". Endgame might be Aotearoa’s best line of defence since its strategic decision to locate itself on a very small and boring archipelago in the south Pacific.

Requiring brilliant ingenuity and a decent budget, it makes perfect sense that the best, brightest, and most well funded boffins from the University of Auckland's Engineering alumni were able to craft a machine as brilliant as Endgame, who adeptly took out seven of its ten competitors in the this most recent season.

According to Endgame's official stats, it weighs 110kg, armed with a 23kg disc that spins at 6,000rpm, which is capable of tearing through 50mm steel. If Endgame were any more capable of cutting things, we would expect it to land a job as the next Vice-Chancellor of Curtin University.

Endgame quickly took out former two-time World Champion, Tombstone, in just 39 seconds. Maintaining a steady pattern of throwing 100kg robots out of the ring, Endgame suffered only one loss to Bloodsport, and went to defeat Whiplash in the final.

Endgame, and its operating team dubbed The Kiwi Killers, helmed by Jack Barker, join the ranks of New Zealand's best sportspeople, such as the All Blacks and shot-putter Valerie Adams, as the current best in the world.