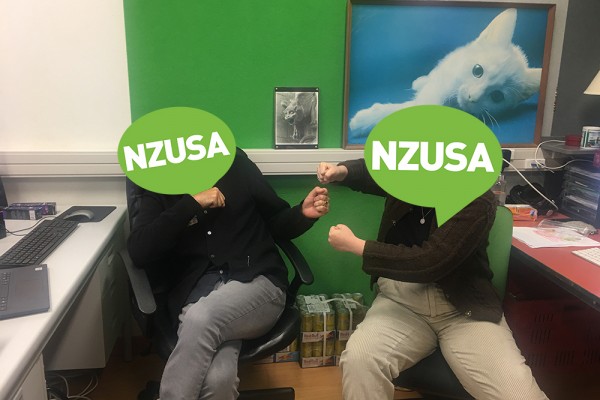 OUSA either being gaslit, or are reading too much into things

The position of 2021 President of NZUSA remains vacant after a reportedly “hostile” election full of “bullying” and “politicking” resulted in a stalemate between ITP (Intitute of Technology and Polytechnics) candidate, Andrew Lessells, and university co-candidates, Marlon Drake and Taylah Shuker.

In order for a President to be elected, the National Executive of NZUSA must agree to a candidate at 67% or 2/3rds. There are three rounds of voting if a supermajority cannot be reached, however each round saw a variation of 20-21 or 21-20 for either side.

The OUSA exec members present at the election reported a significant amount of division between the ITPs and Universities over who would be the better President. OUSA President-elect, Michaela Waite-Harvey, said in an OUSA Exec meeting that the election was “hostile” and full of “toxic bullying”. Josh Miekle, Finance and Strategy Officer, explained that there was a “disagreement on who was up for the task [of President].”

The bullying was allegedly coming from the polytechnic side of the debate, however excluded the polytechnic candidate himself. Andrew told Critic that this was the first he had heard of these accusations. “I can say that I am categorically not aware of these accusations [and] it is extremely unlikely that [there was bullying] from the ITPs, particularly as we are aware of the importance of solidarity in national movements.”

Andrew said that there was “a bit of disagreement” on who should be President, but that this was all done in good faith.

The university co-candidates Marlon and Taylah do not wish to comment.

OUSA President Jack Manning said that the situation is “embarrassing” and that “[we] are all hypocrites for letting this happen… [that] hostile, internal politicking was really disappointing”.

How each student union voted remains confidential, however Josh did say one of the university candidates in particular would be “fantastic”.

Emily Coyle, current Academic Representative and 2021 Administrative Vice-President, made a point to emphasise how they need to keep a relationship with UCSA and AUSA. “If we can’t rely on NZUSA for connections, we have to take it on our own hands,” she said.

National Congress was able to elect a Vice-President for 2021, Liam Davies (2020 Engagement VP for Massey Wellington Students’ Association), who will be the interim president until another election can occur in January 2021.

2020 NZUSA President Isabella Lenihan-Ikin was not present for most of the elections and “not involved”. She decided not to comment on the accusations, but said she made every participant “aware of the NZUSA Bullying and Harassment Policy, which has a specific section on how we deal with such issues if they arise at events. There is a zero tolerance for any behaviour.”

An ITP insider who asked to remain anonymous believes that OUSA is “projecting” with these accusations, and claims that what was perceived as toxic was actually just university unions being unhappy that ITP unions were “demanding to be taken as seriously as unis” at the national level. They believe that the “[Uni unions] don’t want to give up their stronghold of NZUSA,” as 2020 has seen an increase of ITPs joining NZUSA. Andrew does not agree with this assessment, as he does not think OUSA is projecting, however said that congress had been an “intense period” for people, and thinks that people present may have interpreted what went on in different ways.

To this, Jack responded: "Any student association - university or ITP, member, associate member or non-member - should feel comfortable speaking their mind about the conduct expectations at NZUSA. The suggestion this anonymous student leader has made is materially untrue, and not a true representation of OUSAs values. We do, however, want to address the underlying assertion: ITPs and Universities are equal, and deserve to be treated as such. OUSA will continue to support the equal treatment of ITPs and Universities, in line with a desired culture of transparency and collegiality that doesn’t enable infighting and internal-politicking."

In 2021, the ratio of NZUSA will be 8:6 university to ITP student unions. Otago Polytechnic Students’ Association will also be revisiting the question of joining NZUSA in 2021.

Update 15/12/2020: OUSA exec members do not recall insinuating that the ITPs instigated the hostile, toxic bullying, and say that both sides are equally to blame. As media and students are not permitted to record audio of the OUSA exec meeting, there is no way to verify what was said beyond OUSA's memory and Critic's notes.