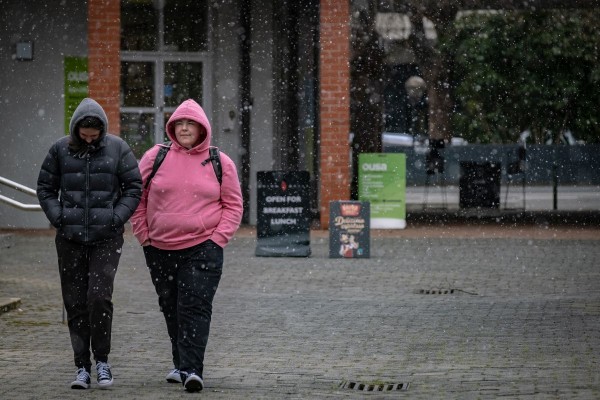 “You seriously want to write about this?”

After announcing his departure from campus, Scarfie Weather was back online last Thursday (24 September) with a hot take: “I wouldn’t be surprised if we saw snow on Tuesday down to sea level, throughout Southland and Southern Otago.”

The independent weatherman said of his prediction, that “I just looked at a bunch of different sources and felt like I had a good prediction, so I went for it. And I think the next ones to predict what I’d said was MetService the next day.”

Anyone who woke up before noon on Tuesday got to see that prediction come true. Other national forecasts began showing snow at sea level about 24-hours after Scarfie Weather’s prediction, really showcasing the meteorological brilliance coming out of Otago.

“Yeah, if there was enough snow, I’d strap on some old skis, tie up to the back of a ute and bang it down George Street,” said Scarfie Weather.

On the Thursday of Scarfie Weather’s prediction, other major networks were only predicting snow to 400 metres, which has “way different implications for all the low-lying farms that actually got the snow on Monday”.

Tuesday’s snowfall, which affected Dunedin, was part of what Scarfie Weather called “one of the most extreme, aberrant weather events we’ve seen in recent years”.

“There're so many newborn lambs all over the Central Otago and Southland area, and I wanted to make sure those farmers knew what was going to happen as soon as possible,” he said. The former Dunedinite said he wasn’t “trying to assume he knew best”, he was just “excited at making an independent prediction and watching it come true”.

Lewis, another weather-enthused Otago grad, currently works at MetService. He confirmed that MetService predicted snow to “low levels” on Thursday, and called snow at sea level on Friday morning. Thursday was “the first chance for one of our meteorologists to forecast for Tuesday”, because they run on a 6-day forecast cycle.

Currently based in Wanaka, Scarfie Weather looks at the American and European weather models as well as “heaps of other charts, maps, and forecasts” to get a full picture of what’s going on before making any predictions. For him, it’s like betting on sport.

“There’s a certain adrenaline kick of predicting something and getting it bang on.”