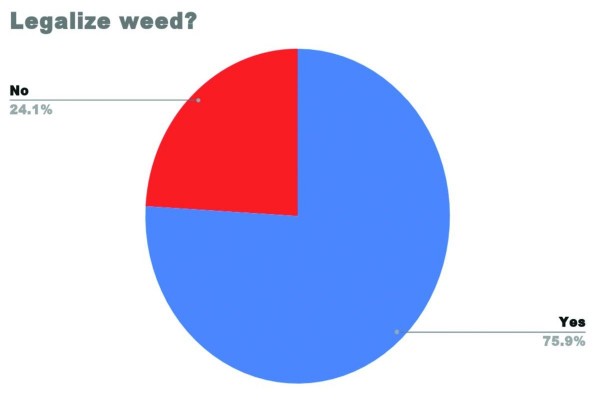 We Harvested Your Data and Are Selling it Online

Just kidding but here’s some graphs

Oopsies, we’re reporting on politics. Can’t help but engage with a good bit of data. We polled students on the Dunedin Electorate, seeing as that’s where the majority of students live. Sorry, Taieri. We know students live there too.

In the past, I’ve tried to show that polls can be bullshit. 91% of students don’t want to eat Stewart Island-sourced Kiwi meat, but we managed to design a poll that showed that result. Do keep that in mind. Our sample size for this poll was 134 people. The poll was advertised on our facebook page, so the data below represents “students who follow Critic on Facebook”, not “all students”. Also, there is no way to guarantee that the people who responded were students, or even not the same person. All polls have flaws.

Colmar Brunton and Reid Research sample about 0.00031% of the eligible voting population for their national polls. Critic beat their standard by sampling 134 students to get this data, or 0.0029% of students at Otago (almost 10x more representative).

Caption: About three quarters of us want to #legalise it. No surprises here. Look at how nice that breakdown is - almost exactly a quarter say no! So nice when numbers work out like that.

Caption: Labour and National are duking it out for 50% of the vote, with a slight blue edge. Greens dominate the other half, with TOP and ACT cleaning up the scraps. Critic says Nats and Labour oughta sock wrestle for 2nd.

Caption: National edges out the Greens and Labour, but just barely. TOP had a better showing than ACT or NZF, which pulled in similar numbers. Many Dunners students don’t vote here. There is no listed Māori candidate running for MP. Looks like a pretty even split.

Question: What issue do you care most about? One word answers.

By far, the two dominant answers were ‘climate’ and ‘economy’.

But there were some nuances. Let’s break this down by party vote:

People who voted Labour seemed to have their concerns split equally between society, health, environment and the economy, each receiving 4 or 5 mentions. There was a nice shoutout to “kindness”.

People who voted National overwhelmingly mentioned “economy”, which brought in exactly two thirds of the votes. The remainder focused on health and education.

People who voted Greens obviously cared about the environment, which pulled in 23 of their 58 votes. They also cared about another type of greens: “weed” accounted for six votes. “Equality” and “health” both pulled about ten votes, with health splitting evenly between Covid concerns and mental health concerns.

There were few enough people who voted for the remaining parties that we can list their individual votes.

NZF didn’t receive a party vote in our poll, but that doesn’t mean they don’t have concerns.

Question: Why are you voting this way? Two words.

Here’s where the fun begins. Let’s kick it off with an investigation of the word “fuck”. 8/134 of you guys used it in your answers, targeting farmers, National (x3), Collins, capitalism (x2) and all of the candidates.

One of you said: “How could this be done in two words? Here’s an essay.” And then proceeded to write a paragraph partially explaining why they’re voting against weed, which is a very “I don’t smoke weed” thing to do.

Good on you for following the word limit.

And that’s that. People seem to care about common issues, and are divided more by disliking other parties rather than supporting individual policies. We’ll see how the election stacks up. Happy voting.