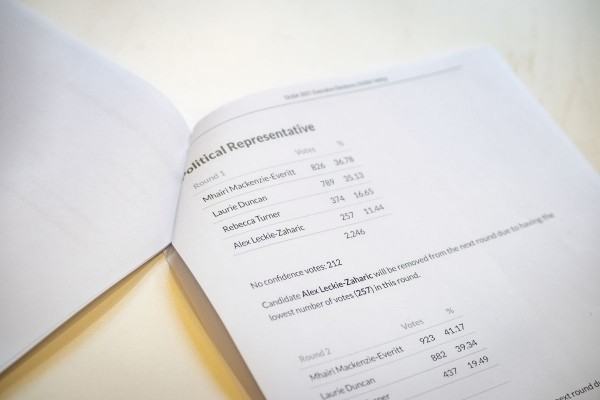 Most Predictable OUSA Election in Years

Students vote in super competent people, despite Critic’s pleas that competency is boring

Michaela Waite-Harvey won the OUSA presidency convincingly. The results were announced in the Main Common Room last Thursday. There are five current Exec members continuing on in their roles or taking new positions in the 2021 Exec.

Michaela is moving up from Welfare and Equity Representative to become President in 2021. She won with 69.25% of the vote, over contender Sammy Bergen’s 30.75%.

“It feels really humbling to be able to rep students at the University of Otago, and to be able to rep the diverse population we have, Māori and Pasifika and Pākehā, in one human being,” said Michaela. “My two biggest goals are to revolutionise the volunteer system within OUSA and also increase student representation on University Council to at least three students, which will involve lobbying the government to amend the Education Act.”

“I wanted to do an authentic Sammy campaign, talk to people I know and use the positivity that I've tried to make on campus for the last couple of years,” said Sammy. “Obviously it wasn’t enough, but that's the way the cookie crumbles. I’m proud of myself and what I did, not many people can say they did this.”

Emily Coyle is also switching roles, moving from Academic Representative to Administrative Vice-President. She won with almost exactly the same lead over her opponent, Jake Perkins, at 68.67% to 31.33%.

“Emily was an excellent candidate,” said Jake. He was happy for her. He felt he “campaigned well” and at one point “climbed into the leith” in order to put up a banner.

“I'm so stoked [to win], it's my birthday today so it's a really good present,” said Emily Coyle. “We have so many plans in place, all those promises we made during the election, those are going to happen.”

Josh Meikle, unsurprisingly, won his uncontested race against only 188 votes of no confidence and will continue as Finance and Strategy Officer. “It's gonna be hard work but I'm really overjoyed about getting the job,” said Josh. “We're gonna need to be able to balance the finances. But I'm gonna work hard to make sure the things OUSA wants done can get done.”

The other candidates in uncontested races, Sophie Barham for Postgrad, Geraldi Ryan for International, and Maya Polaschek for Welfare and Equity, all won their races easily.

Current Clubs and Socs Representative Dushanka Govender won a close race against Emma Wilson. She got 54.79% compared to 42.42% for Emma. “It was a good run though,” said Emma. “Big congrats to Dushanka for winning, I think she’ll do a really good job.”

The Politics Representative race was the closest. Four newcomers to OUSA competed. But after two rounds of single transferable vote eliminations, Mhairi Mackenzie-Everitt beat Laurie Duncan by just 11 votes. The percentages were 50.25% to 49.75%.

“Despite not being elected, I'll continue to advocate for student rights,” said Laurie. “I wish Mhairi all the best for the role and am happy to support her in any way I can.”

Alex Leckie Zaharic, who was also running for Politics Representative, said he was “fine” with the result. “I’m the youngest one here so everyone here has vastly more experience than I do,” he reckoned, so he wasn’t surprised to lose. “Mhairi will do a fantastic job.”

Mhairi said winning this position “feels a little like a dream”. “Campaigning was probably one of the most stressful things I’ve ever done but clearly it was worth it! I’m so excited to see where this role takes me and so stoked to be put in a position where I can try to make real change for students!”

Michael Evans won Academic Representative after another close race against Adam Currie. Michael got 55.68% of the vote and Adam got 44.32%. “I feel alright, it’s exciting,” said Michael. “I think I’ll do a good job, it’ll be good.”