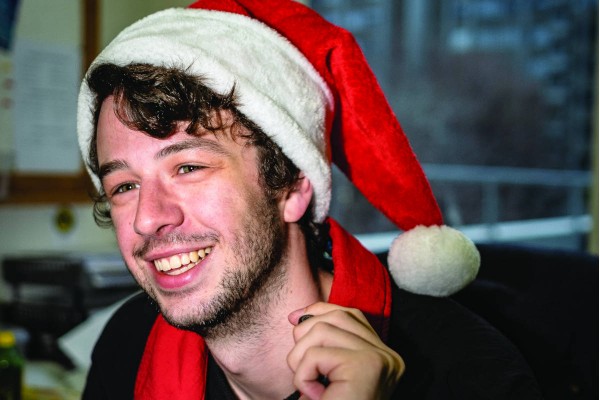 Jack’s Off: An Exit Interview

After one year in the top job, Jack Manning is preparing to leave the role. On December 31 he is out of the desk, and into the lion's den of life. The OUSA President sat down with Critic in his small, intimate office to talk about life, love, chicken satay and everything in between.

Jack inherited the role of President from James Heath, a very popular president. “I think a lot of other people felt pressure for me, but the two most important people who didn’t were James and myself,” Jack reflects. “I’ve made a habit of not comparing myself to James, just as I hope the next OUSA president won’t compare themselves to me. We haven’t had the same challenges and the same issues.” And no, he’s also not willing to dye his hair ginger. We asked.

I’ve grown to know Jack through the Critic Bachelor—a slow, messy affair which Jack infamously friend-zoned all the contestants almost instantly. So, screw student politics, what happened between him and Amanda, the winner? Jack looks down. “It didn’t happen. It’s my fault to be honest. I got too busy and didn’t message her until I actually properly tried to set it up. We talked about [going on a date], after we established we weren’t going to be an actual couple, but too much time went by,” he admits. To his critics of his dating style (mostly me tbh), he shrugs off the implication that he wasn’t overly invested in the dating process: “That’s fine.” Is it though Jack, is it?

Outside of the world of wine, cheese and girls, Jack’s most proud of the grade bump OUSA managed to achieve for students for the first semester. “Until we were getting it over the line, I thought it was impossible, a shitty pipe dream.” His second proudest achievement is signing the Sophia Charter, which Jack describes as an “emotional” experience. He’s found his time as President as “very rewarding, but not without its challenges and speed bumps”. He admitted that the job had “never been something I ever saw myself doing. I never saw myself as any type of leader growing up.” He also admitted that “I’ve had this very strict policy on myself of working as little as possible when I’m at home”. Finally, a relatable leader.

This year has been a turbulent one. Jack, for one, is grateful for his great team on the OUSA Exec. “They’ve been my rock, to be honest. Constantly they motivated me. I feel like such a proud parent when I talk about them, particularly because they all got elected, myself included, having no idea what coronavirus was, or what those challenges would look like.” He admits he’s struggled at times with decisiveness, such as “I would often try to find consensus on the Exec where there wasn’t going to be, or I would take too long making a decision when the important thing is making a decision. I haven’t always got it right.”

For those readers who want to sneak a glimpse of Jack beside his presidential curtain, let’s lift the drapes a little. Jack describes his downtime as watching Netflix and barely going out. “I’m such a homebody. It looks like rigorous self care. Self care has been something I’ve gotten into.” That being said, he’s yet to get into face masks so really, how into self care can someone be? His go-to Netflix and chill movie is Monty Python and the Holy Grail, a famously safe bet. “I’ve seen the movie so many times,” he gushes, yet refuses to disclose the actual number, claiming memory loss.

On a dusty Sunday, you can find Jack powering out a 5-minute scrambled egg (with pesto! Personally, Bone Apple Teeth is not a fan) alongside a Powerade or tea. Considering Jack has been very loud in the past about his complete absence of cooking skills, I’d steer clear of this one, girls. Just take the Monty Python and go. If he’s eating lunch on campus, Jack’s go-to is a satay chicken nigiri from Sushi Station. He also wears real glasses, despite them looking fake. He voted for National in the last election but won’t say who he’s voting for now, apart from that “it’s changed”. There’s so much, and so little, I know about this man. He’s kissed someone in his office “once, in January” with his girlfriend at the time, and a long discussion ensues about what counts as making out vs a peck. We decide on peck.

As for what’s next for Jack, it’s looking like Wellington and a public sector job if all goes to plan. What does he envision for a Michaela presidency? “I think a lot of Michaela’s strengths come from, firstly her experience on the Exec, and I’ve had the honour of working really closely with her this year, but also her unique life experience, which can’t be replicated, and I know it will be an immense benefit to her and to the students.”

Overall, Jack will miss Otago, but "after 22 years in Dunedin, I won’t miss the fucking weather”. Enough said. He concludes with a list of acknowledgments, which I will now print because I’m not a total bitch. “Thank you Mum and Dad, thank you to Donna Jones, to Paul Gourley, thank you to Caroline, my friend (that’s me! lol), and thank you to the entire OUSA Exec for supporting me. Sinead’s okay too. But thank you to everyone. It’s been a hell of a year.” Thank you Jack Manning, for your service.