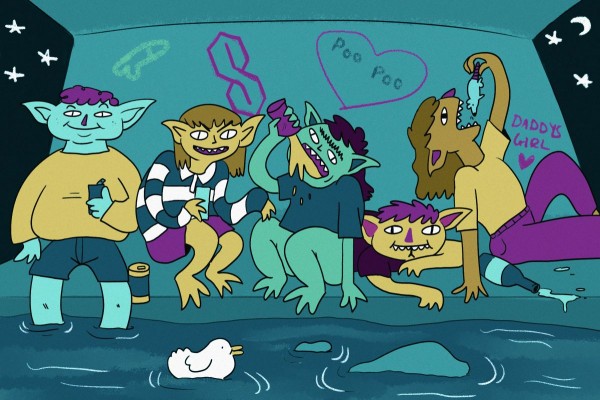 Why are they drinking under a bridge?

Last week, a mate and I were peacefully eating curry at Taj Mahal. Two hours later we were drinking alongside a gaggle of well-suited, piss-drunk first years, taking shelter from the midnight rain under a Leith Street bridge. Critic returned to the bridge to find out how this culture started, and why, of all places, students have chosen the bridge as their piss-up preference.

I’d been invited to the bridge by a group of lads coming to Taj for their own BYO. They summoned us to their table, and told us to “meet them under the bridge in a few hours”, which according to my Mum is “a great way to get stabbed”.

In the name of semi-respecting their privacy, we won’t name exactly where the bridge is. Just that there's a walkway that goes underneath it, so students aren’t just standing in the riverbed. Not that people don’t get in the river: according to one first year whose name I’ve totally forgotten, “every week, someone tries to cross”. And every week, someone takes a tumble in the rocky Leith. “It’s much harder to cross than you’d think. Especially on the piss.”

It was a terribly stormy night, but there was still a group of about 50 students drinking in the dark and cold when we got there. I’m sure this was exactly what they’d hoped to get out of their university experience. Amidst the throng, I caught myself thinking “where the hell am I? I’m about to start postgrad, what am I doing here? Am I getting… old?”

Shit, it was the first time I’ve felt old. I’m old enough that the BYO game I was so familiar with - save the Queen - was something my hosts had never heard of. And the next day, my suspicions were confirmed when a former Cumberland College RA told me “the bridge isn’t news. Kids have been going there for years.” Guess I never got an invitation.

At the BYO, when we were first told of the bridge, I was shown a video. It was taken from above, and showed a crowd of maybe 200 people mingling in the riverbed and on the sidewalk. A tussle had broken out in the middle. Students were shouting. Campus Watch looked on.

When asked, Campus Watch said that they “encourage safe and lawful behaviour of those present” at the bridge gatherings. So keep it classy, guys.

Students say they’re there because of Covid. A classic excuse this year. Freshers, as we know, can’t socialise in groups with fewer than 25 members, and because bars can’t host large groups, this meant town wasn’t an option. Due to exams, they couldn’t drink in halls either.

“Where else besides halls and town can freshers drink that’s out of view and out of the rain?” asked the Cumby RA, “there aren’t that many options”. I guess I can’t blame them. The bridge offers a great central location, ambient water noise, that whole “post-industrial” aesthetic, and just generally sounds cool. “See you at the bridge.” It’s got a nice ring to it.

Problem is, there’s no bins. “Yeah, rubbish can be a problem”, said another first year, whose name I also forgot. Some students put their empies back in their boxes to throw away later. Some leave them under the bridge. Some leave the glass to break up “naturally”, in the same river that people try to cross barefoot “every week”.

Freshers reported that this spot was their own new thing, but reports from people that have been on campus for anything more than a year say otherwise. One student says this year, the bridge is most popular from Thursday on, and my friends from the BYO say that it usually starts “quite late”. When Critic visited at 10pm it was derelict, perhaps because town had reopened. Perhaps because they’d heard we were coming.

First years, if nothing else, are creative. I remember the days when I had to hide my drinking. I remember when the world was a pitcher to be filled with whatever’s cheapest and strongest. It was my honour to be welcomed back into the ranks of our youth, but ultimately, it was a shitty experience. It was wet, uncomfortably hard, and smelled like cologne and stale beer, which, to be fair, does perfectly describe me during my first year as well. You can’t ask for too much.

The bridge became an oddly fitting social metaphor, and the bottom line is this: nobody drinks under a bridge by choice. It’s a creative solution to the obstacles life throws at you. You only find yourself drinking under the bridge if you aren’t allowed to drink anywhere else.

Or if you thought journalism was a viable career.