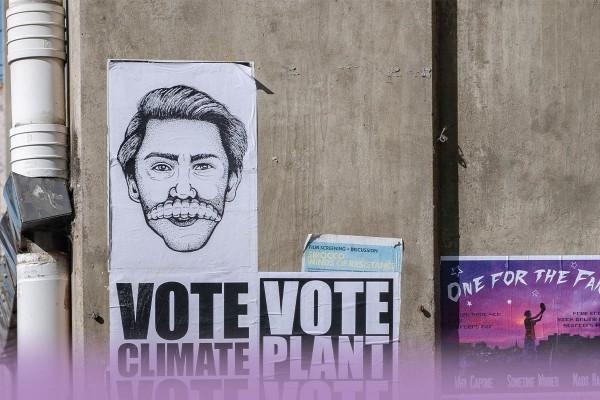 Jack Brazil Posters May Be Illegal

Local artist breaks rules, Green Party gets in the shit

The Electoral Commission are investigating whether posters of the Dunedin Green Party candidate’s face are an illegal election advertisement, after several complaints. Other Dunedin electorate candidates have called these posters “a slap in the face” and “reprehensibly inappropriate”.

The stylised posters of Jack Brazil, the Dunedin electorate candidate for the Green Party, were created and distributed by Toothfish, a local artist and collective. Toothfish confirmed to Critic that this was done without the permission of the Green Party candidate. Like the stylised posters of Jacinda Arden which read ‘Aroha’, the posters might not comply with the law in the Electoral Act.

The posters initially displayed the words “JACK BRAZIL” next to his face. In a summary of an email exchange between Toothfish and the Electoral Commission, verified by the Commission, these posters were “preliminarily declared these to be political advertisements” in mid-August, “as they may reasonably be regarded as encouraging or persuading voters to vote for Jack Brazil as a candidate”.

To remedy this, Toothfish covered up the “JACK BRAZIL” with “VOTE CLIMATE”. However, on 1 September, Toothfish said the Commission advised him that the altered text, in conjunction with the caricature posters, were probably also advertisements. The Commission believed the posters still counted as encouraging or persuading voters to vote for Jack.

This time, Toothfish covered “VOTE CLIMATE” with variants of “VOTE” along with either an environmental, peace, love, whenua and tamariki slogan. Toothfish remain steadfast in their claim that the posters are not advertisements because they do not pay to poster spaces and the posters do not reference a candidate or political party by name.

“I certainly appreciate what [Toothfish are] trying to do by drawing back to the fact that climate and ecological collapse is one of the most important issues we face,” said Jack Brazil. When asked if he thought that this case was similar to Arden’s ‘Aroha’ posters, he said, “I haven’t seen any of these posters displayed in a commercial advertising space, which is what I understand was the legal issue at hand [with the Aroha posters]”.

Toothfish believes that there is “no obvious legislation which actually defines the exact nature of a ‘non-party’ political/electoral advertisement in this country”. They call into question the Commission's power to legally mandate artists “satirising or commenting on political figures or events in the lead-up to national elections”.

The status of these posters remains under investigation by the Electoral Commission.

Other Dunedin candidates aren’t stoked with what they believe is free and unfair advertising. ACT Candidate Callum Steele-Macintosh said that “unnecessary exposure” to information can cause a bias. “Seeing Jack's face every 20 metres down the road is a clear example of a misuse of advertising,” he said.

“They should be removed to ensure an equal and honest election. I would feel the same if it was myself or any other candidate.”

“It is disappointing to see Jack Brazil attempting to remove himself and the party from any responsibility. He knows the effect they will be having on people, and if he wanted them taken down they would have been removed within 24 hours of being put up,” Callum said.

Ben Peters, The Opportunities Party candidate in Dunedin, said that he approached Jack when he saw these posters. He believed that Jack should know they breached the Electoral Commission’s rules “so that he could take appropriate action”. Ben passed on this correspondence to Critic, which showed Jack confirming that he had nothing to do with the posters.

Ben took issue with Jack’s claim that the posters were put up without Jack’s knowledge. “He knows exactly who has done them and why. It seems a bit contradictory.”

Both Callum and Ben emphasised that this particular issue has nothing to do with party politics. “I like the Green Party and don't think this represents them in any way. If you align with Greens you should vote for them,” said Callum.

“But these comments and choices show a lack of maturity and responsibility on Jack’s part. He is letting an outside influence bias voters in the election and doesn't care about the implications because it benefits him. It is reprehensibly inappropriate and I do not ever wish to see that attitude and approach to democracy in a politician,” said Callum.

“The other candidates don't seem to be aware, but Ōtepoti/Dunedin has a rich history of artists subverting the dysfunctional system of politics. I'm certainly not going to deprive an artist of their art, nor is it my job too,” said Jack.

Ben believes that this is “clearly” political advertising, and that to say it isn’t skirts around the transparency required for a democracy. He said it also goes against the need to ensure candidates spend below the advertising limit, “which is a very important aspect of keeping big money out of NZ politics. [Promoter statements] also tells us who is actually sending these messages.”

“Transparent democracy is something that the Green Party has campaigned on and championed,” he said. “It feels hypocritical for a Green candidate to then condone and support this poster campaign.”

“Democracy is something by the people, for the people. It comes from creative expressions and is a growing and alive thing. It is not stuffy like the other candidates would have it be. I hope to bring joy to politics and connect with the people of Ōtepoti on issues which actually matter like the climate/ecological crisis, housing and poverty,” said Jack.

“When parties with a significant incumbent advantage like the Greens flout the rules and are not called out by the Electoral Commission … it is a bit of a slap in the face. I find it a bit concerning that a political candidate has such a low opinion of the law,” said Ben.

Ben pointed out that Toothfish and Jack knew each other personally. “There really isn’t a good excuse not to ask his mate to add an authorisation statement, or just run the posters outside the campaigning period,” he said.