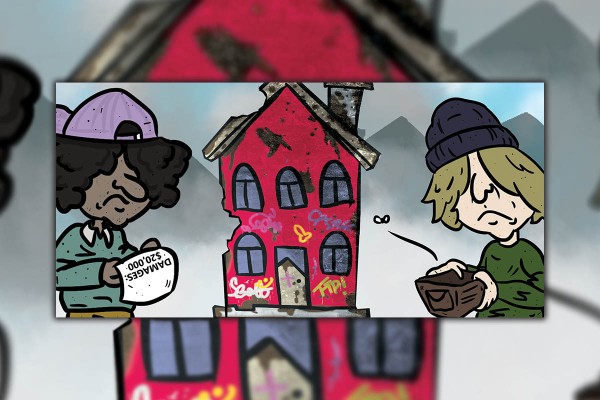 How the fuck do you even manage to do 34k in damages?

A group of students were evicted from their Castle Street flat and are now being pursued for an impressive $34,000 in the Tenancy Tribunal.

Critic spoke to Tom, one of the tenants, to find out how he managed to get evicted. Diagon Alley, the flat he and his mates rented earlier this year, “is probably the most notorious one for partying,” he said. That conjures up a familiar picture in the collective heads of North D party-goers -- broken windows, crate furniture, and holes in places you didn’t know you could get holes. The flat has a rowdy history, and if those walls could talk, they probably wouldn’t for fear of being hit again.

19 of the walls in Tom’s former flat have holes in them. I repeat: Not 19 holes, but 19 separate walls. Two people told Critic that they’d seen people vomit into the walls through these convenient openings, sort of like a gloryhole but decidedly worse. Tom did not confirm this.

Generations of breathas have not-so-gently passed down this flat to the next year of like-minded individuals, complete with a new set of contributions to the flat aesthetic. Over the years, damages stacked up, and Tom’s group of mates have been left accountable for repairs that may be (at least partially) due to their predecessors. “We had no intentions of leaving the place in a state and spent over $2/3k on repairs throughout the year,” said Tom.

A GoFundMe was started in June with a goal of $20,000 to cover “new carpet, new heat pump, repair like 19 walls or something, 4 windows and lots more… haha leshgo.”

“They don’t deserve anyone’s sympathy. Period,” said one Castle Street resident when asked whether she would contribute to the GoFundMe. “When I saw they made a GoFundMe, I was like wtf deal with your own shit. That is not my problem.”

While Tom may have been content living in a flat whose only intact windows were in the bedrooms, his landlord was not as stoked. Tom said that him and his mates were “slowly fixing it all,” but that “it just kept getting broken again”. That caused tension with their property manager at Propertyscouts, Barry Brown, who apparently holds interior decor standards above “Swiss cheese”.

Propertyscouts denied to comment on the situation, seeing as the case has yet to pass through the Tenancy Tribunal. Once passed, they would like to provide input. At Tribunal, Tom and his mates hope to lower the dues.

“I don’t think old mate Barry Brown understands the student culture”, said Tom, a clear expert in the student culture. “It happens every year on Castle.” Next year, “I’m thinking it’ll be the same,” he said. “The boys have already signed it.”