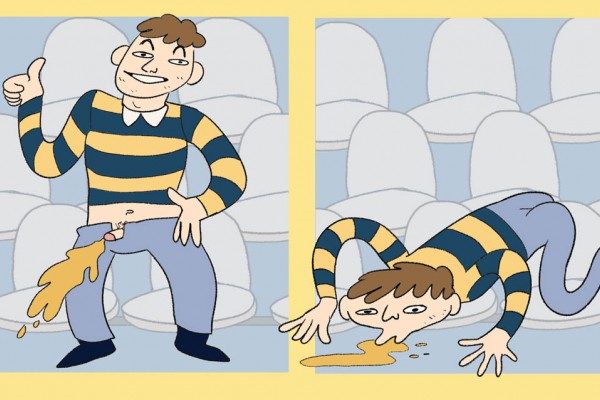 Man Floor-Sucked Own Piss in the Zoo

Not exactly what we mean when we say “sink piss”

During the 2 August rugby match at Forsyth Barr, the tragic loss of the Highlanders to the Blues was briefly interrupted with a student literally drinking his own piss.

In the middle of the Zoo, a little before halftime, a breatha unzipped his pants and peed onto the seat in front of him. There was an eruption of screams and cheers.

Then, the chant “floor suck” began. The breatha then knelt down and drank his own piss from the hollow part of the seat, becoming the Bear Grylls of the Zoo.

Video footage obtained by Critic showed the young man with his hands on his peen and the stream falling into an empty seat in front of him. Thankfully, the seat’s occupant had been standing at the time. The second video showed him licking his lips with a small amount of pee dripping from his nose.

Although the full mechanics of the act went unrecorded, Critic assumes that the unidentified man dipped the lower half of his face, from the nose down, into the puddle and slurped. The cries of disgust were masked by the encouraging yells of the nearby breathas.

An eyewitness of the event said that it was “absolutely fucking feral, and it was a Sunday game”.

The individual who filmed the video said, “I mean tbh was pretty creepy, the guys were the most breatha you can get. He did suggest we drink his piss but he did the honours himself”.
Considering this was a Sunday game, the rowdiness of the pee-suck did not match the general vibe. The witness also said, “we are literally all freshers and most people around us weren’t even that drunk so it was deffo the most interesting thing I’ve witnessed in the Zoo”.

The pee-petrator continued his tirade against innocent rugby-goers, the same witness saying, “oh not to mention, he then did steal my chips [a] half-hour later”.

When asked what the witness would say to piss boy, they replied, “honestly just god why? best of luck with your future buddy. I don’t know if he’s gonna get any credit with chicks saying he drunk his own piss, but how about maybe not freaking about a bunch of freshers on a Sunday night?”

“Honestly just puts us all off breathers but hey, for sure funny to look back on.”

Dunedin Venues Management Limited (DVML) manages Forsyth Barr stadium, and a spokesperson said that they were not aware of this incident and do not condone it. In future, witnesses to inappropriate behaviour are encouraged to approach venue staff who will be stationed in all stands. Alternatively, there is a text message service. “We would certainly take action if this sort of antisocial behaviour was witnessed and/or brought to our attention,” the spokesperson said.