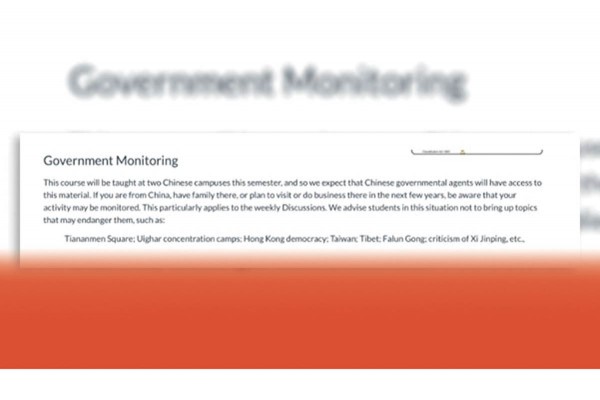 Critical thinking class doesn’t want to be too critical

A lecturer advised students taking PHIL105: Critical Thinking at the University of Auckland not to discuss issues that are controversial for the Chinese government, because of a risk of danger from “Chinese governmental agents”. The course is taught on two campuses in mainland China, as part of the University of Auckland’s response to border restrictions caused by the Covid-19 pandemic.

“We advise students not to bring up topics [in discussion] that may endanger them, such as: Tiananmen Square; Uighar concentration camps; Hong Kong democracy; Taiwan; Tibet; Falun Gong; criticism of Xi Jinping, etc.,” said the lecturer in a post on Canvas (the equivalent of Blackboard at Auckland).

This message was directed towards students from China, who have family in China, and who plan to visit or do business in China. The post warned students to “be aware that your activity may be monitored”.

Nina*, a student taking PHIL105, said: “I’m fucking spooked. Why would the University set up a program they knew could endanger students?”

The PHIL105 syllabus states that students will learn how to apply reasoning tools in areas including morality and law. The weekly discussions are the leading cause of the lecturer’s concern.

“We expect that Chinese governmental agents will have access to this material,” wrote the lecturer.

The University of Auckland confirmed that they were aware of the lecturer’s note on Canvas. “We do not see this as suppressing free speech, rather a general warning to all students that social media comments and conversations can last long beyond a class discussion and may not be appropriate out of context,” said a spokesperson for the University.

“We also understand that there are cultural differences across many of our international partners and our academics have the freedom to address these as they see fit. This is part of our role as critic and conscience of society,” the spokesperson said.

“The universities need to take a clear line on this … I can report that the message given to students in PHIL 105 reflects the contradictory and very unsatisfactory situation we are placed in being required to teach into China,” tweeted Associate Professor Matheson Russell from the University of Auckland’s Philosophy Department. “It is certainly not an endorsement of that situation or acquiescence to it.”

“Neither the CCP nor any government power ought to be allowed to influence what is taught in NZ universities and if the freedom of students to freely discuss ideas in our universities is compromised we will be in a dire situation.”

Uighar Muslim concentration camps, democracy in Hong Kong, Taiwan, Tibet, and Falun Gong (a religious movement labelled a “cult” by the Chinese government), are topics that should be avoided, according to the lecturer’s post. Criticism of China’s President Xi Jinping is also listed.

Students were warned against discussing Tiananmen Square, the student-led 1989 protest where over 10,000 people were reportedly massacred while exhibiting their right to free speech. This estimate has been disputed by the Chinese government.

Last year, a Tiananmen Square memorial event, organised by Chinese students at AUT, was cancelled. It was later reported AUT’s Vice-Chancellor made the decision at the request of China’s Vice Consul General. AUT deny this was why the event was cancelled.

In June, China’s legislature approved a new security law which has implications for both non-Chinese and Chinese communities abroad. Anybody found committing acts deemed subversive could be sentenced to life in prison. It’s why the New Zealand government has cancelled their extradition treaty to Hong Kong.

“Obviously in a time of precarious university 'revenue streams' there will be a financial incentive to be 'entrepreneurial' and push into new 'markets',” said Associate Professor Matheson. “But this can't compromise the university's fulfilling its primary purpose in NZ.”