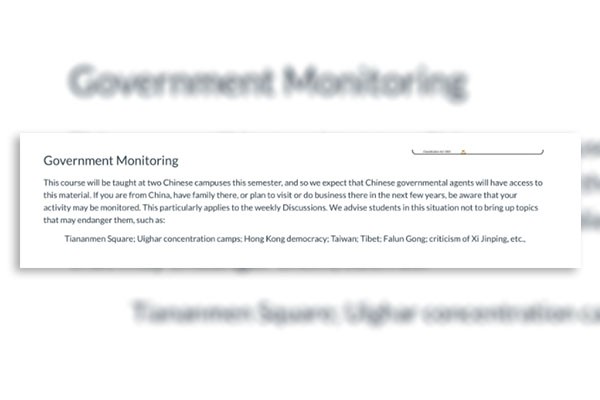 A lecturer advised students taking PHIL105: Critical Thinking at the University of Auckland not to discuss issues that are controversial for the Chinese government, because of a risk of danger from “Chinese governmental agents”. The course is also taught on two campuses in mainland China, as part of the University of Auckland’s response to border restrictions caused by the Covid-19 pandemic.

“We advise students not to bring up topics [in discussion] that may endanger them, such as: Tiananmen Square; Uighar concentration camps; Hong Kong democracy; Taiwan; Tibet; Falun Gong; criticism of Xi Jinping, etc.,” said the lecturer in a post on Canvas (the equivalent of Blackboard at Auckland).

This message was directed towards students from China, who have family in China, and who plan to visit or do business in China. The post warned students to “be aware that your activity may be monitored.”

Nina*, a student taking PHIL105 said: “I’m fucking spooked. Why would the university set up a program they knew could endanger students?”

The PHIL105 syllabus states that students will learn how to apply reasoning tools in areas including morality and law. The weekly discussions are the leading cause of the lecturer’s concern.

“We expect that Chinese governmental agents will have access to this material,” wrote the lecturer.

Uighar Muslim concentration camps, democracy in Hong Kong, Taiwan, Tibet, and Falun Gong (a religious movement labelled a “cult” by the Chinese government), are topics that should be avoided, according to the lecturer’s post. Criticism of China’s President Xi Jinping is also mentioned.

Students were also warned against discussing Tiananmen Square, the student-led 1989 protest where over 10,000 people were reportedly massacred while exhibiting their right to free speech. This estimate has been disputed by the Chinese government.

Last year a Tiananmen Square memorial event, organised by Chinese students at AUT, was cancelled. It was later reported AUT’s Vice-Chancellor made the decision at the request of China’s Vice Consul General. AUT deny this was why the event was cancelled.

In June, China’s legislature approved a new security law which has implications for both non-Chinese and Chinese communities abroad. Anybody found committing acts deemed subversive could be sentenced to life in prison. It’s why the New Zealand government has cancelled their extradition treaty to Hong Kong.