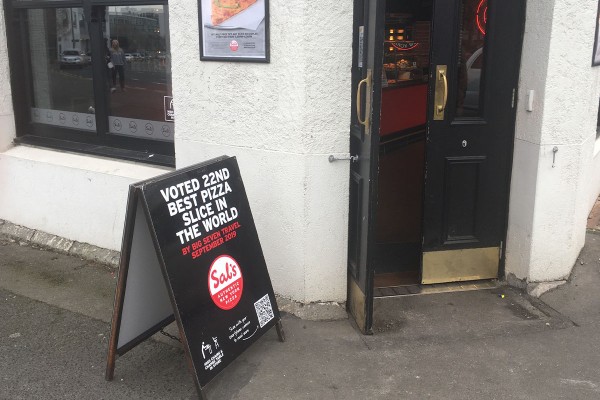 Is Sal’s really the 22nd best pizza in the world?

The following is one man’s (who may actually just be a butch lesbian in disguise) account of Critic’s least significant investigation to date. You may be shocked, you may be horrified, you may be disgusted, but no matter what you feel, please keep reading because I worked really hard on this.

One day, as I was walking to St Dave’s, I saw a local pizza restaurant with a sign outside claiming that they served the 22nd best slice of pizza in the world. The restaurant in question was Sal’s Authentic New York Pizza. For some reason, the incredibly specific number 22 stood out to me as, well, very specific. I decided to investigate.

First, I wanted to know whether this ranking was real, or if Sal’s just wrote a sign and hoped that no one would question it. It turned out to be quite easy to see where the review came from, because Sal’s had a whole page on their website dedicated to it.

On 15 September 2019, a website called Big Seven Media published a review/listicle of “The 50 Best Slices of Pizza in the World”. Sal’s was ranked number 22 on that list.

I thought to myself: Sal’s Pizza, Sal’s Authentic New York Pizza, in Dunedin, located in the downstairs section of what was previously known as the Captain Cook Hotel, is within the 22 best pizza restaurants in the world. I could not believe it. Out of all 50 other bitches on this list, how did she manage that?

I began to look at exactly how Big Seven Media formed their review. What I found shook me to the core. These people, who claimed to have attained the forbidden and powerful knowledge of the best pizza in the world, used a review system that can only be described as dubious. There were nine points of criteria. These included: previous reviews by critics (not the magazine), online customer reviews, atmosphere and service, online presence, location and accessibility, editorial opinions and experiences, value for money, consistency, and presentation.

The big question in my mind was how online presence could be a consideration when reviewing the quality of restaurants. Haven’t ten years of Taylor Swift taught us that popularity and quality are not mutually inclusive factors?

Consistency was another suspicious part of their review criteria, because consistency is something that Big Seven Travel, the reviewers themselves, seem to have trouble with. Their rankings of pizza, in fact, seem inconsistent.

In April 2019, Big Seven Travel released an article called “21 Pizzas in New Zealand You Have to Eat Before You Die” (which is vaguely threatening). Two Dunedin-based pizza restaurants featured: Zucchini Bros and Pizzeria da Francesca. Sal’s made the list, but only their Christchurch store.

Then, in May 2019, Big Seven Travel released their official list of “The 50 Best Pizzas in the World”. The only New Zealand Pizza to feature was Farina in Auckland. Auckland isn’t even in Dunedin.

The review that started it all was published in September 2019, titled “The 50 Best Slices of Pizza in the World”. No Dunedin Pizzas were harmed in the making of this listicle. In fact, they weren’t even featured. Sal’s Pizza in Auckland is the only New Zealand pizza to make the list. The article doesn’t even specify which of the several Auckland outlets is the 22nd best.

So how can Big Seven Travel call Sal’s the 22nd best slice in the world in one article, and fail to mention it at all in a list of the best pizzas in New Zealand? What kind of fuckery???

At this point, I realised that Sal’s was just caught in the midst of Big Seven’s inconsistent and incoherent research methodology. They might use this ranking in their advertising, but it’s not their fault that they got ranked how they did. That being said, the September 2019 ranking of 22nd best slice is used on the Dunedin store, despite not even being open in September 2019.

So, I conducted my own review by asking tens of students for their favourite place to get pizza in Dunedin. The results were a tie between Domino’s (“cheap but kind of meh”) and Sal’s (“overpriced but good”).

As with all investigations, there was a point where I finally realised I had fallen too far down the rabbit hole. I saw an advert for Domino’s Pizza claiming that their Chicken Parma pizza had exactly 22 chicken bites on it. 22. There was definitely a conspiracy going on with pizza and the number 22. This was reinforced when I googled ‘pizza 22’ and discovered that there are several pizza stores in America that used the number 22 in their names. For example, Pizza 22 and Ribs in Calgary CN, and 22 Pizza in Winnipeg US. The Taylor Swift song ‘22’ probably also has something to do with it.

Coincidence? I think it probably is. But if it turns out that there is a conspiracy surrounding the number 22 and pizza, I want everyone to remember how I selflessly risked my life to expose this disgusting web of lies.