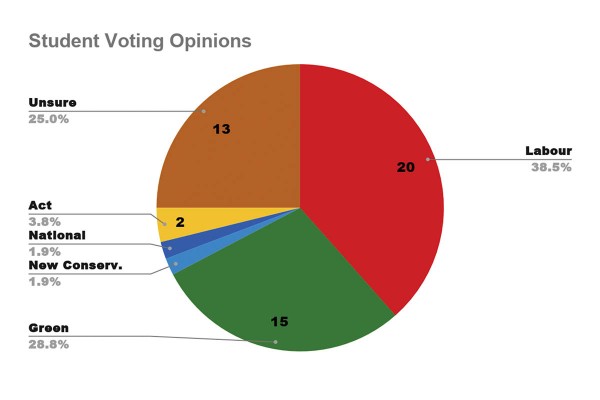 Colmar Brunton sampled only 0.00031% of the eligible voting population for their national poll, so Critic beat their standard by sampling 52 students to get this data, or 0.0029% of students at Otago (almost 10x more representative than Colmar Brunton).

To go by our own previous polling standards from an earlier issue, the small sample size is a “red flag”. But, let’s assume it’s legit.

Dunedin is a red electorate, having only voted for National once as an electorate, so this isn’t too surprising. Students voting Labour are happy with how Jacinda has handled her term so far and want her to continue to act as a leader for the country, perhaps under the assumption that next term will bring an equal number of volcanic eruptions and pandemics. Fingers crossed.

“Labour helps specific people like me,” says one student, which is a quote vague enough to have been attributed to any party on this list.

“Jacinda’s a queen,” said another, which isn’t true. The monarch’s name is Elizabeth. Rookie mistake.

Coming in second behind Labour, Green voters were concerned with the environment and expressed the need for “another liberal party besides labour”.

Students voting Green said that they were sick of what has become largely a two-party system, and want more representation in their legislature.

Jack Brazil’s moustache, which sounds like an excellent new waterslide, was a key voting point, along with the goal of drafting a constitution. What would Aotearoa’s second amendment be? Critic suggests: The right to beer arms.

“I’m just voting this because I played pong with David Seymour.” Ok.

Note to uneducated voters: Act is not the party of thespians. Won’t be making that mistake again.

Party name “New Conservative” also in the running for “oxymoron of the year”.

Honestly, we expected more. The only quote given explicitly about National was: “Nats need to get their shit together before I vote for them.” Obviously what the National party needs to do is change leaders, again, because most comments from students about party politics were “I don’t like Judith”.

Seat breakdown based on this data: