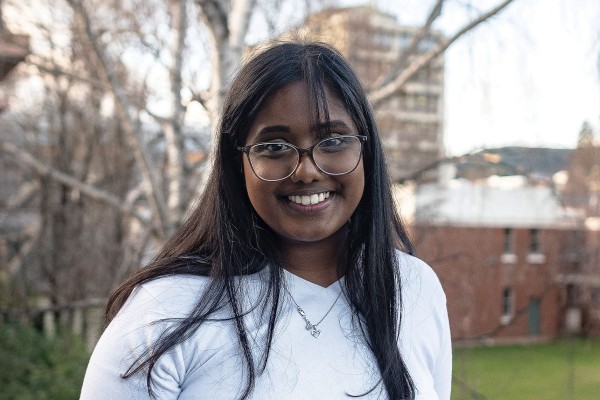 By less than 4% of the Otago student body

702 students have elected their new Clubs and Socs representative for OUSA - Dushanka Govender.

Dushanka was “kind of” surprised by the win. She told Critic, “everyone who ran was so capable and experienced, anyone would have done a good job in the role”.

OUSA elections follow the single transferable vote system (STV), which means that voters get to rank candidates from most to least preferred. The lowest performing candidate gets knocked out of the first round, meaning everyone who voted for Rebecca Turner had their second choice votes distributed between Dushanka and Quintin Jane.

The first round of voting saw Dushanka with 40.17%, Quintin at 34.33% and Rebecca at 25.5%. In the second round, Rebecca’s votes (sans 10 people who voted that they would rather have no one than the two alternatives) were split between Dushanka and Quintin evenly, landing Dushanka a win at 53%.

Quintin was “pretty happy” with his campaigning overall, and said that it was even “a good bit of fun” once he got into the swing of it. He said he wished he had begun campaigning earlier, but overall is “pretty stoked” and “look[s] forward to doing it again” - ooooo spoilers. Although he “[o]bviously… would’ve liked to have won,” he said that Dushanka is a great candidate and will be an “excellent [Exec] member of OUSA and for all clubs in the Uni”.

Rebecca was also happy with how she campaigned, and said that she thinks she “did a bit more than others”. She was “pretty disappointed tbh” in the results, particularly as she has been “quite interested in OUSA and Clubs specifically for a couple of years now”.

In particular, Rebecca was “a little bit disappointed that my experience with handling sexual violence didn’t count for much because I think that should’ve been a really pivotal part of what voters considered”. Rebecca’s experience in sexual violence advocacy was not a part of her candidates blurb which voters would have seen on the voting website when considering candidates.

When asked what Dushanka plans on doing first, she said “working on the [OUSA] Sexual Misconduct Policy. I reckon that’s the most important thing we need to work on.” Next on the agenda is a clubs review: “I’ve heard the role has been neglected over the last few years,” she said. She plans on reaching out to clubs and inviting herself along to their meetings to learn more about them, should the clubs be keen.

Both Dushanka and Rebecca were disappointed in the lack of turnout in the by-election. 702 is pretty damn low, but still isn’t the lowest turnout ever for an OUSA by-election (shout out to 2014’s by-election with 629 votes).