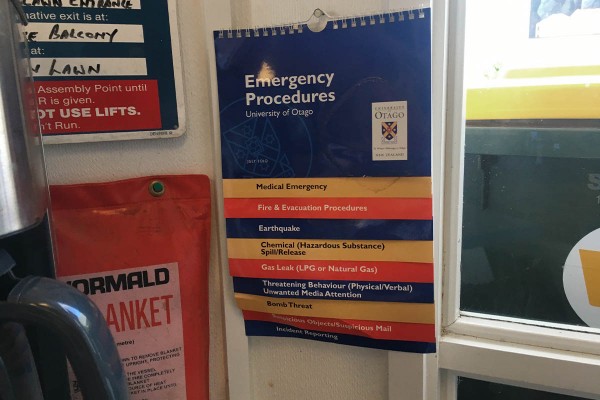 Series of Evacuations on Campus Inconveniences Some Students

Evacuations on campus caused a slight inconvenience for students, and is potentially karma for their eaerness to be on campus this early in the semester. St Dave’s was evacuated on Friday, then Central Library on Saturday, and Mellor Lab was evacuated on Wednesday, all within the span of a week.

In a statement made to Critic, Directory of Property Services, Dean Macaulay said that the evacuations were not linked.

The first evacuation was St David’s lecture theatre, which was evacuated on Friday afternoon during a lecture after students and staff began smelling gas. A University spokeswoman confirmed that “at about noon on Friday, there was a failure of a diesel generator within the basement of St David Lecture theatre. The site was evacuated by the Fire Service with support from Campus Watch.”

The second evacuation was at Central Library on Saturday. Students reported seeing smoke in the library. A student said they “looked around for a good two minutes before actually leaving bc no one seemed too rushed to leave”.

A person who was working in the library at the time said that they saw smoke and the security guard asked them what to do. They told the security guard to break the glass on the smoke alarm and pull it. “So many ppl were saying it was a drill but why would there be a drill on a Saturday haha,” they said. “[The security guard] did a good job tho! The smoke was coming from East Lane somewhere, the basement maybe.”

“I was evacuated from Central on Saturday and had to sit outside in the freezing cold for like 45min,” said a student. “There was only a few clouds of smoke honestly it looked like it could’ve been coming from Gregg’s we were all a little confused.” According to that student, five fire trucks showed up.

Macaulay described this power outage to Critic as a ‘brownout’. “This results from minor fluctuations in supply and led to multiple buildings losing main power for a short period. This triggered an overheating alarm and the library triggered an evacuation,” he said. “Power was quickly restored, and the PABX returned to normal temperature. The building was reoccupied.”

“Was just fucking annoying tbh always assume it’s a joke,” said another student. “Everyone walked as slowly as possible out because I feel a fire alarm doesn’t alarm anyone these days.”

Because the evacuation occurred early on in the semester on a Saturday, Macaulay confirmed that there were only about 30-50 people evacuated from Central Library (nerds). He also believes that the two evacuations are not linked, and it is just coincidence. Macaulay further stated that “as part of our emergency preparedness or health and safety team run evacuation drills on our larger and heavily occupied buildings on a 6 monthly planned rotation.”

The third evacuation was the Mellor Labs on Wednesday afternoon at about 2:10pm. One student in Mellor Labs at the time said that they went outside for “about 5 mins”. “They told us nothing lol, probably fire drill,” that student said.

At time of writing, the cause of this is not known. One student who contacted Critic recalls that she was in Mellor Labs when it got evacuated and “we were sent outside for a minute, then went back inside and no one knew what the fuck happened”.