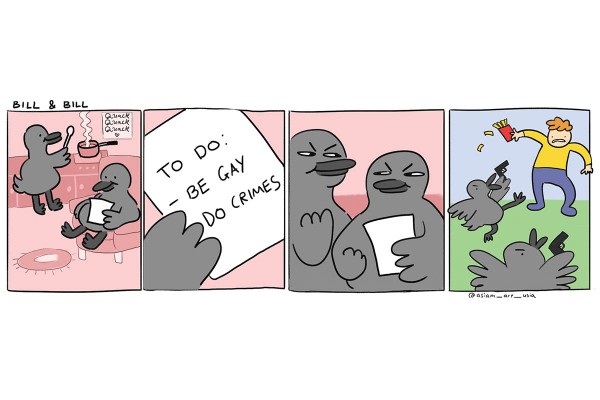 Campus Duck Back and Batting Both Ways

DOC is still to confirm whether Bird Rescue Dunedin (BRD) released the Bills, but it appears that, yes, our darling ducks were relocated to Tomahawk Lagoon. Cue our collective tears.

In case you’ve missed it, our resident queer icons recently got in trouble for a brunch date at Kiki Beware. OUSA was set to hold an official meeting to adopt the ducks permanently on Friday 17 July, but BRD allegedly relocated them before the meeting could be held.

The Bills have not been seen together on campus since earlier this month. But a familiar lone male paradise duck was sighted on Tuesday 21 July, under unexpected and potentially heartbreaking circumstances: He was with a lady.

Critic does not know what goes on at Tomahawk Lagoon. It may be a long shot, but gay conversion electro-shock therapy is not technically out of the question. This is a joke. Quack.

Catherine, resident Bill expert and owner of the Dumpling Truck, said she was convinced the lone duck was him based on his appearance and pecking behaviour. The Bills were known to honk for free dumplings at the back of the truck, and she observed this behaviour on Tuesday. By the way, let Critic know if this back-quaking method works for humans, too.

Catherine recognized the begging honks but didn’t recognize the temptress. The lone Bill was seen on the Wednesday and Thursday following the initial sighting, without the lady. So while we cannot confirm that this means he’s bisexual, we can assume that her attempts to graft were unsuccessful. Some things just aren’t meant to last.

What does the future hold for Dunedin’s top couple? Will they return to Union Lawn to bask under the shade of OUSA’s 130th birthday tree? Have they decided they need to take some space? Only time will tell.