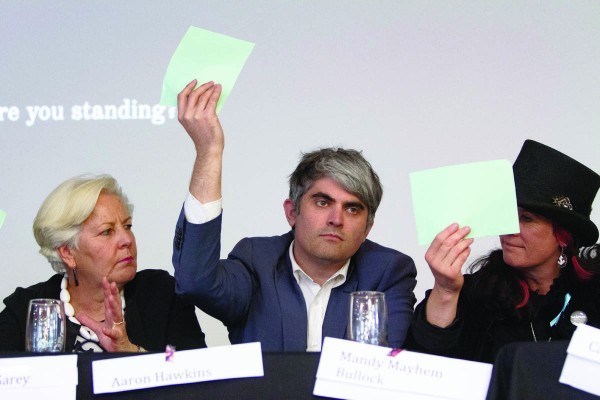 The DCC say they are doing their best, having made six promises and upholding only one.

One year ago, the group that represents students (OUSA) delivered a list of issues to the group that represents the city (DCC), and asked them to pledge their commitment to whichever of the causes they wanted (or not, because the vows were optional). Many would-be Dunedin City counsilpeople were sceptical of making a promise they couldn’t fulfil but, nevertheless, several candidates entered into a signed engagement with the student body to accomplish the following goals:

Free bus fares for students, a one bottle per person policy at BYOs, to develop a Climate Change Mitigation and Adaptation Plan by 2021, to account for impacts and effects of climate change, to develop a landlord licensing scheme, and to develop a rental warrant of fitness scheme.

They have fulfiled the first one, but only until August when buses start to charge everyone again.

These pledges, which were intended to serve as an accountability measure, raised the concern of particularly anti-committal member Lee Vandervis, who said that they would hamper a representative’s ability to “enter into all decision-making processes with an open mind”. He also referred to the OUSA pledges as a “pre-election pledges game,” and referred to “climate ideology” as “hot air” which, while literally correct, does not actually refer to the climate-concerned standpoint taken by OUSA.

Lee also remarked that “ignoring OUSA pledges would present few difficulties for [the DCC],” seeing as their priorities may not be getting “free stuff for students for whom half a bottle at BYOs is also not enough.”

You know what else has six promises? Wedding vows. So, just as a thought exercise, let’s talk marriage: after 150 years of steamy courtship, by voluntarily signing these pledges, some members of the DCC “accept[ed] a mandate from 19,000 students” to be held “accountable”.

To me, that sounds an awful lot like an engagement. Let’s imagine, for a moment, that I could take up the clichéd version of vows of marriage with the same standards of fulfilment as the six pledges taken by the DCC. What would that engagement look like?

With the same commitment standard that the DCC has with students, I’d only have to uphold one of those vows for my future wife. Sounds like a sweet deal to me.

Aaron Hawkins provided comment on these pledges, with the general vibe of ‘yeah, we hear you, but we can’t really work that fast’.

Here’s what our Mayor had to say about each issue:

Sounds like they’re trying, but politics are complicated and slow, and bureaucracy is not exactly known for its efficiency. That being said, it’s the same adage we’ve all heard time and again from a fickle partner: ‘I’m trying, I promise, just give me another chance.’  But what is our relationship with the DCC built on, if not pillars of trust?

The voting student population represents a significant demographic in the uni-centric city of Dunedin, and (in the words of every neglected spouse ever): if you can’t handle us at our worst, you certainly don’t deserve us at our best.