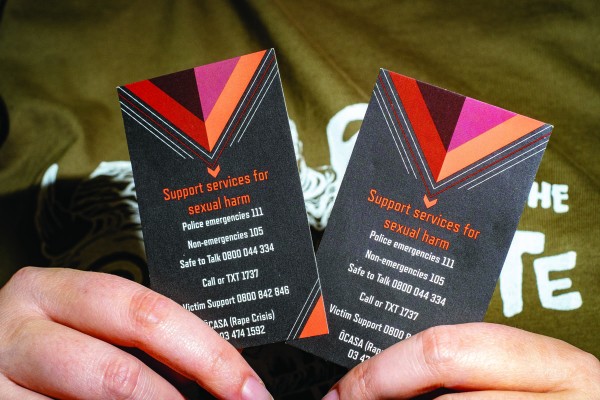 Angel Shot, Ask for Angela, Sophie’s Angels; if you’ve spent any time on social media since 2016, chances are you’re familiar with these campaigns. If not, they offer people a way to leave unsafe or uncomfortable dates. These initiatives provide a code word disguised as a drink that people can ‘order’ with bar staff. Bar staff will either remove whoever feels unsafe from the situation by providing a ride home or getting security involved. Students Corey, Sarah Shirley and Paige Devlin are working to bring a similar programme to Dunedin. They have called their programme ‘Red Light’.

As fourth-year students of Health and Wellbeing at the Otago Polytechnic, they were tasked with a “community outreach” project as a part of their course. Their goal was to identify a community they identified with, and work to empower and support that community. They chose rape prevention, given, as Corey stated, “we have horrible statistics. Welcome to Dunedin student life.”

“We wanted to create something that supported people to feel safe, we knew that [similar programmes] existed elsewhere, but Dunedin didn’t have a rock-solid thing.” Although attempts have been made at similar initiatives in the past, they have yet to be successful in Dunedin.

Their plan consists of distributing posters with information for staff and potential victims to bars throughout the city. They will also leave small business cards providing emergency support phone numbers. As the project only launched last week, they have yet to follow up, but Sarah suggested that they might “go in and test them out, order the ‘Red Light’ and see how they respond”.

Although the Red Light project and other similar programs are focused on women, the team is aware that their project is currently limited, and in future would like to focus on an intersectional approach to the idea. Corey said, “we would like to broaden that to have a different name for a male-focused, or a gender-inclusive one, for people that aren’t females, because we know that people who are not females are victims of sexual assault or harassment.”

The students believe that their Red Light project addresses rape culture in its more sinister, subtler form. Corey said that people can feel obligated to accept someone’s offer to go home with them, even if they feel uncomfortable. “If we could prevent even just one person from being harmed, that’s a win.”

The bars that have signed up so far include Albar, Innocent Bystanders, The Craic, Dunedin Social Club, Stuart St Mac’s and Reading Cinema.