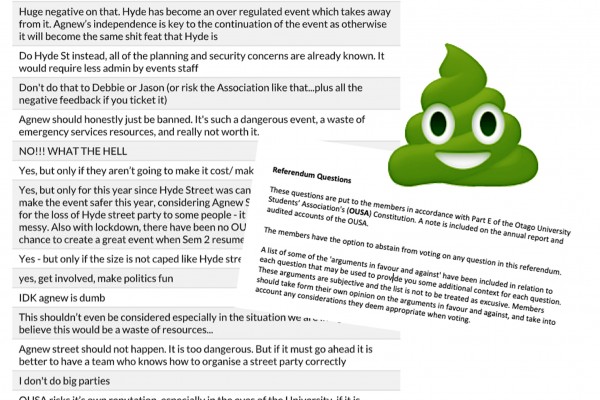 The Best and Worst Anonymous Comments From the OUSA Referendum

The OUSA Referendum happened and it was pretty average. The only real contenscious issue that emerged from the results is whether or not students want OUSA to co-host the Agnew Street party like they do with Hyde (it narrowly failed).

The most interesting thing about the referendum is always the anonymous comments section. Here are some of the best and worst of them.

Question about OUSA lobbying for a political party

People who don’t understand the question/think it was phrased in a convoluted way: 17

“Get a grip you bastards. You are not that important. Never ever speak on my behalf.”

“This is a genuinely awful idea. I’m voting the same way that most students probably will, but holy shit who thought this could possibly be a good idea?”

People who don’t understand the question/think it was phrased in a convoluted way: 5

“God, please no. Can I terminate my membership easily enough?”

“Yeehaw! Legalisation is strongly supported by evidence, which many people due to values from a different era seem unable or unwilling to engage with. OUSA should use it’s platform to make the evidence-based case for legalisation so it becomes less of a partisan decision.”

“What the fuck is this supposed to mean, should OUSA have an opinion on having an opinion?! dumb as fuck question if you ask me.”

“Nope, stay out of politics, you’re not paid to lobby Govt and suck resources away from dealing with other issues. Like, say sexual harassment on campus, self-harm etc. People can make up  heir own minds and vote accordingly. No need for mummy/daddy OUSA to have a word on my behalf.”

“OUSA is not impartial, it’s a political organisation, and if you don’t lobby for a yes vote for the cannabis referendum you’re on the wrong side of history.”

“Is OUSA encouraging people to be drug addicts now?”

“No, cannibus is bad”

“We need to escape the void of suffering, and the plains of despair which the war on drugs has produced. Legalizing cannabis goes a long way to beginning that process. This is a health issue. We cannot remain impartial when doing nothing leads to the erosion of society. The hottest places in Hell are reserved for those who in time of moral crisis preserve their neutrality.”

People who don’t understand the question/think it was phrased in a convoluted way: 5

“”Retention of impartial nature of OUSA”? who the fuck came up with these pros and cons”

“Less of a logical connection between students and euthanasia”

“Do we want all our grannies and grandpas to die?”

People who don’t understand the question/think it was phrased in a convoluted way: 2

“100% cut funding. I do not want to have a membership in a union like organisation. Cheers.”

“Why would you decrease student unionisation and reject a national lobbying body at a time like this??”

“OUSA have conveniently excluded the impacts on national Māori student representation, not to mention NZUSA’s efforts towards national representation & cooperation for LGBTQ & disabled students, calling into question exactly who you bothered to consult in forming this referendum.”

People who don’t understand the question/think it was phrased in a convoluted way: 13

“Restructure whos governing structure? Ours or theirs?”

“Surely you can make that decision by yourself??”

“What would a restructure look like? How would it differ from the old structure? This question is dumb.”

“OUSA leadership should be solid before it is addresses national governing Structures.”

“Structure of nzusa or ousa? Ousa’s restructure isn’t going that well either.”

“Only if it means dumb cunt high schoolers and fucking freshers can stay out of it.”

“I think part of the student culture is unregulated drinking, so just let this one be Uncontrolled.”

“Keep ya filthy fingers off the one party the students still have to themselves. You’ve already ruined hyde.”

“Do the mahi get the treats.....don’t party till graduation.”

“Absolutely not, there is no requirement for university associations to assist in events. A separation of powers in terms of university management and social life must exist. We do not live in North Korea, my boss’s and teachers do not need to feed me beers on the weekend.”

“We need a replacement for HYDE to maintain student moral and general wellbeing."

Should OUSA try get a law changed in order to legally suss a spectrophotometer, in order to test students' drugs legally?

“Steal one from one of the bio labs?”

“I mean.. if drugs can be illegal and unsafe in the first place why take them?”

“??? The Chemistry department has like, hundreds of these, just contact them about possible contracting. Circular economy baby.”

Plus a bunch of comments bagging on Josh Smythe, the clubs and socs rec, and students wondering if this is a direct @ing of Josh by the rest of the OUSA exec.

"Should OUSA investigate a better funding and accountability model for Critic for proposing a potential change to the model in a latter referendum?"

People who don’t understand the question/think it was phrased in a convoluted way: 26

People who corrected a grammatical error in the wording of the pros/cons: 4

“this is a terribly worded question guys, what the fuck.”

“Who wrote this question??? It is nearly unintelligible. >:[“

“I’m confused about this question. What funding and accountability models are currently in place? This seems like a ploy to restrict media independence.”

Should OUSA establish a branch of Student Volunteer Army at Otago?

“Tokenism at its finest.”

“There are already enough services on campus for this.”

No stand-out comments. Everyone was just pretty hyped about how this should be a thing.