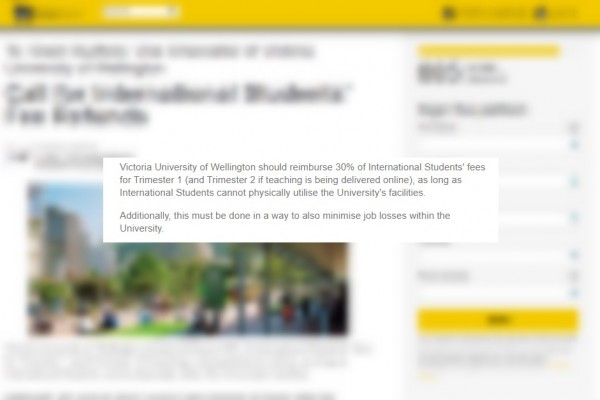 The VUW International Students’ Association (V-ISA) are petitioning their University to get a 30% fee refund for international students who returned home for lockdown. The petition, hosted on ActionStation, was created on 16 May and has 849 signatures at the time of writing.

“It is unreasonable that the University continues to charge full tuition fees when all courses are being delivered online to the students,” the petition states. “Especially given the fact that international student tuition fees are extortionate, [at] four times higher than the standard tuition fees.”

“It just felt unfair,” said the President of V-ISA, Eden Ee. He said that “we have [heard] many concerns from international students who say, we pay $4000 per course and we’re only getting the course through Zoom.”

Eden hopes that the petition will get enough attention for the Uni to take a serious look at it. They initially reached out to Vic and received no response, he said. Victoria Uni did not respond to Critic’s request for comment.

“I think this would cause a huge impact on Vic if they turned this offer down,” he said. He believes that the Uni has been treating them like “cash cows”. “I think Vic should take care of the current international students rather than creating marketing strategies for incoming international students.”

VUWSA supports V-ISA’s petition. They have also been advocating for a fee reduction for international students. They raised it in an open letter to Vice-Chancellor Grant Guildford in April. “We have raised the issue of refunds to [the] University since the beginning of lockdown and have continued to keep it alive in university discussions throughout this trimester,” a spokesperson for VUWSA said.

VUWSA President Geo Robrigado said that the “bottom line is that students pay for the full student experience and it is unfair for students to not receive the experience they paid for, especially with courses that do not lend themselves well to online learning and the absences of facilities for a substantial chunk of their trimester." They will continue to lobby Vic to refund more courses as well as supporting V-ISA's petition.

There is no equivalent petition in Otago. OUSA’s International Representative, Arina Aizal, said that “I do not feel the need to create a petition as Otago has been one of the Universities in New Zealand that is progressive enough to support international students by having the Pūtea Tautoko hardship fund available for us.”

Arina has been talking to the University about reimbursements and said she has “been told that the matter is still being discussed”.

“International students are lacking financial support providers, as most government hardship funds or student reliefs are not available for us to access, which is frustrating because we are all suffering the same consequences,” Arina said. “We lost jobs too. We pay rent and electricity bills too.”