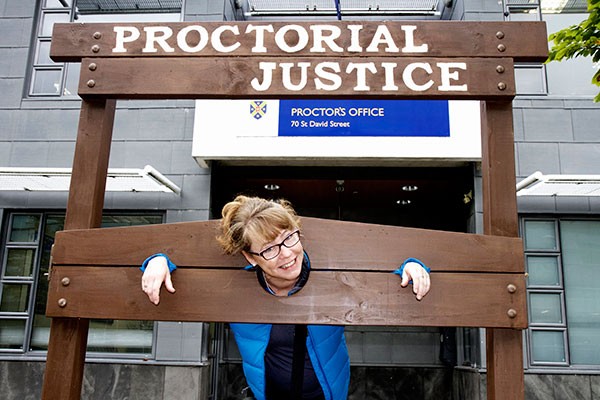 The University has the Proctorial Justice stocks tucked away in storage, and it looks like that’s where they’re staying.

The stocks were removed during the first weeks of 2019, when they were loaned out to the Otago Museum as a feature in their Dare to Be Wise exhibition. The exhibition featured various items of importance in the history of the University as a celebration of its 150th anniversary.

A University spokeswoman has confirmed that the stocks were returned last December, and are currently being kept safely in storage.

The stocks were originally installed in 2015 by former Deputy Proctor Andrew Ferguson (now the guy who heads the University’s emergency response) as a memorial to former Proctor Ron Chambers, who passed away in late 2014.

Some students are disappointed that the stocks are staying in storage. One student considers them an important landmark for students, and that many students have fond memories of them. She said “one of the first things I did in Dunedin was a treasure hunt around Dunedin and we had to get a photo in those stocks with our group. I made friends from that I still talk to.”

Another student supported the University. He said “they're just a kinda lame tourist photo opportunity. They’re better off [in storage].” He continued, “if the argument is that they have historical value then they shouldn't just be displayed in the open.”

“I think the University is getting a bit tired of my inquiries into this,” said incredibly handsome Critic reporter Wyatt Ryder. Critic pledges to work day and night until stocktorial justice is achieved.