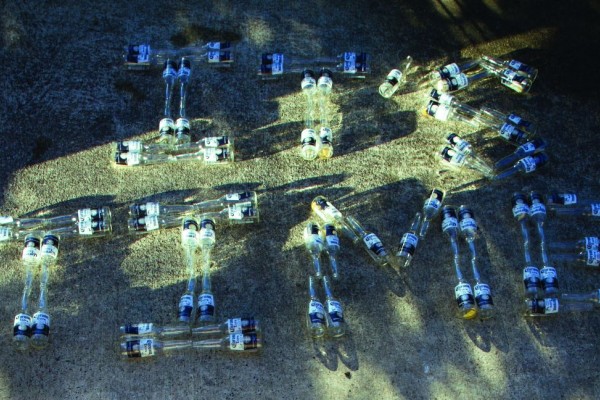 OPINION: It's Time To Recycle Your Shrine of Empty Bottles

When you move into a flat, one of the first things you think about is decoration. You decorate your bedroom with the things you want, in an effort to best describe your personality. You create your lounge area as a communal space that showcases your mutual interests and your identity as a flat. There's so many ways for you and your mates to express yourselves.

So why is it that having a designated area for a shrine of your empty bottles of alcohol thought to be the finest form of interior design?

In most flats, it’s common to see hoards of empty alcohol bottles or cans. You can always see at least one empty wine bottle floating around someone’s room, or a lot of empty beers that have been left on the designated beer pong table. It may be due to sheer laziness, or just because you think having fifteen Billy Mav’s stacked on one another looks cool. But at the end of the day, it doesn’t matter. On a basic level, showcasing and proudly displaying all your empty booze has stopped being cute. Now, it’s tacky. Is it meant to be a physical signifier of how big your dick is? I mean, you can at least repurpose them and put some candles or flowers in them to make them have some sort of functionality. Otherwise, there’s just so much recycling you’re going to have to deal with at the end of your lease. I get it, sometimes you forget about them to the point where it just becomes a natural part of your flat decor, but how hard is it to just put them in a recycling bin?

However, I think the issue here is more than just superficiality. Parading and showcasing empty bottles is just fuelling the cycle of Dunedin’s competitive drinking culture. Everyone knows that Otago Students and drinking go together hand in hand; it’s all a part of the quote-unquote Otago Uni experience. The danger in this is just how competitive the drinking here has gotten. Every Sunday, you’re bound to get asked “what’d you do last night?” to which you’re then expected to boast about how absolutely cunted you got the night before. Responses are generally blasé, with a casual “oh yeah I sunk two goons and a whole box and I can’t remember anything”. There’s an impetus that you’ve always got to go hard or go home. There’s no point in half assing it, so you put your body and liver on the line to get absolutely destroyed. This then starts the toxic competitive side of drinking. A strong sense of pressure always controls us to try and drink more, because being hungover the next day is almost seen as a cool status point.

Drinking can be a social lubricant, a fun way to hang out with mates or go meet new people at some random party. Seeing empty bottles littered over a flat has come to represent some sort of trophy and status symbol saying “yeah we love to get drunk”. But in reality, it’s more of just a physical reminder of how much money we waste on drinks that you won’t even remember enjoying. Even looking around my room now, the two bottles of empty wine I have forgotten about would be enough for me to buy a succulent chinese meal, which in hindsight, would have been much nicer.

The reality is that Otago’s drinking culture is unlikely to change. Everyone has the right to do what they want, and if it’s drinking, so be it. But we need to eliminate the competitive element from it. Drinking shouldn’t be considered some kind of ego competition, because it only resorts to harmful behaviours that can have serious consequences to your body and self.

The empty bottles proudly displayed around your flat would look better at a recycling plant. There are so many different ways that you can decorate without having to rely on alcohol, anyway. Go to an op shop and find a tacky painting to draw over. Get some nice house plants that you can care for while your liver recovers. Go to Kmart and get some fairy lights or some shit. Find some nice ways to make your home a home, without feeling the insistent need to fit into the Dunedin student archetype. You gotta have at least some sense of individuality. If you weren’t doing this intentionally, though, then let this at least be a reminder for you to take the bins out.