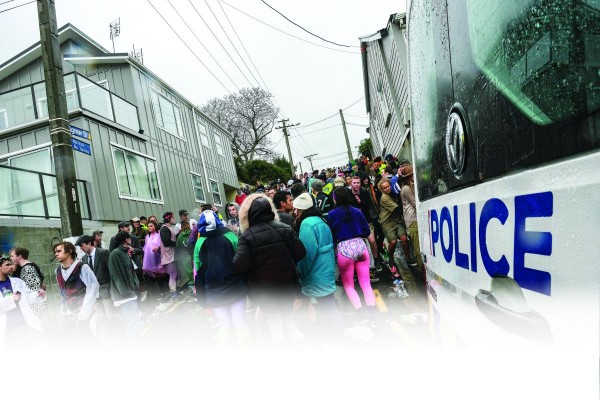 Agnew Street 2020 Will Be An Uphill Battle

If we go a year without a street party, will Dunedin cease to exist?

Agnew Street Party organisers will face an uphill battle against concerns from emergency services, emails released to Critic under the Official Information Act show. Suggestions to stop or mitigate the risks of Agnew include an eight month alcohol ban in the area.

“Numbers attending the event are now at dangerous levels,” the Proctor said on February 3 2020 in an email sent to the Fire Service, the Southern District Health Board, two members of the Dunedin Police, St John’s ambulance services, the CEO of the Dunedin City Council, and the CEO and President of OUSA.

The Proctor wrote in the email that “what [he is] hearing very clear from the Dunedin community - namely you, is that the event can no longer be supported and/or tolerated.”

“This message needs to be communicated by you to the 2020 tenants of Agnew Street early in the student year,” he wrote. “The message should not come from the Vice Chancellor, nor I, but from you - speaking as representative of the Dunedin community,” the Proctor wrote.

He then arranged a meeting with Agnew Street residents and the recipients of the email in mid-March. That meeting never went ahead due to the Covid-19 lockdown, a current resident said.

The Agnew Street resident told Critic that “things aren’t looking too good” for the 2020 Agnew Street party. Since “regulations around isolation are unclear (in terms of what we can/can’t plan) at this stage, we have chosen not to [plan the event at this time],” they said.

There is still some hope for those looking to attend the street party. “If time permits and it becomes socially acceptable to hold a large gathering, then we would look at further planning of the event,” the Agnew Street resident said.

Police communications before the 2019 party show that the cops were not happy about the event going ahead.

“I believe all attempts to stop this event should be undertaken,” Sergeant Ian Paulin said before the 2019 party. He described Agnew Street 2018 as “a diabolical mess”.

One of the 2019 Agnew Street organisers was threatened with prosecution if they accepted sponsorship from Nitro. The Proctor emailed him on August 6, 2019, to say that if the organisers did accept the sponsorship, “it starts falling into the realm of section 235 of the Sale and Supply of Alcohol Act, being a place of resort.” Critic confirmed last year that Nitro did sponsor Agnew Street 2019.

Concerns about the 2020 party were raised by emergency services at a debrief after the 2019 Agnew Street party, notes released under the OIA show.

There was also a lot of MDMA use, which Sergeant John Ferguson described as “a worrying trend”. He noted that “Dunedin has the highest per capita for MDMA in the waste testing procedures in the country.”

The Proctor was also concerned that op shops were promoting Agnew by advertising costumes for the party.

The debrief then moved on to “how we can stop or at least majorly mitigate the risks”. The group discussed putting an alcohol ban in place over the street in 2020, either for the 48 hours of the party weekend or for eight months.

The group then decided that the eight month alcohol ban might be unrealistic, but could happen if the Council decided to implement it, so it was “still a possibility”.