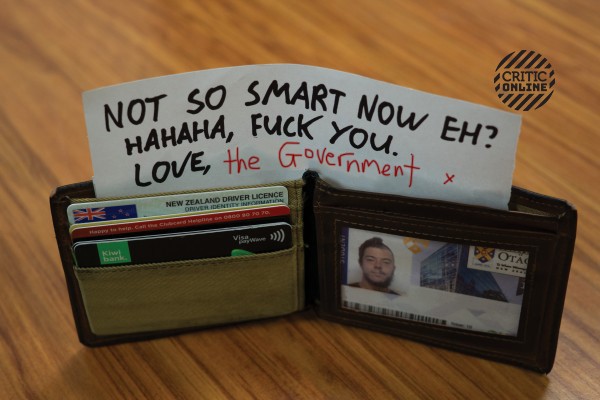 The Government’s Covid-19 tertiary support package has been met with feelings of disappointment and anger by students. Students believe that the Government is ignoring their concerns during the Covid-19 pandemic. NZUSA (the New Zealand Union of Students’ Associations), claim to have been literally ignored in the development of the package.

Almost three weeks into lockdown, tertiary students have received their first Government support package in the form of a $98 million extension to student debt. Tertiary students are the only demographic in New Zealand whose Covid-19 support is a loan.

The support package gives students the option to take out an additional $1000 in course-related costs, which will need to be repaid. Additionally, students whose courses have been cancelled due to Covid-19 will continue to receive Studylink support for up to eight weeks. Students whose courses have been cancelled or partially refunded have also been reassured that their eligibility for fees-free and student loan entitlements will not be affected.

When students apply for course-related costs, they are prohibited from taking money out for “normal accommodation costs”. It has been confirmed to Critic by Hipkins’ press secretary that the additional $1000 is loaned under the same rules.

OUSA President Jack Manning believes “this financial support package does nothing to address student hardship”. NZUSA President Isabella Lenihan-ikin pointed out that of the hardships that students are facing, paying rent is currently at the top of the list. Both Jack and Isabella said it was unfair that only full-time domestic students could access course-related costs, leaving part-time students in the cold.

Finn, a student from Vic Uni believes that the package “completely omit[s] some of the actual needs of students - domestic and international”. Scout, a recent Otago Polytechnic graduate, said “I’m thinking of all the students in flats unable to afford heating right now … [the Government] should have at a bare minimum extended the winter energy payments to be for students too”. Xavier, a student from Auckland Uni, feels let down by the government. “[During Covid-19] We have had no changes to our allowances all the while main benefits were increased. The government is letting down an already vulnerable group,” he said.

Students feel ignored by the Government’s response to Covid-19

Most students believe that the Government’s response ignores the real concerns that students have. Alarmingly, in the case of student representatives, students have quite literally been ignored.

“[NZUSA] weren’t consulted at all,” said NZUSA President Isabella. “We haven’t heard anything from the Minister [of Education] since Covid-19, despite multiple attempts.” The Minister has been approached to comment on this claim.

Isabella said that NZUSA approached the Ministry of Education to provide their data on student hardship, which they accumulated  through a student survey. They hoped that this would be used to inform a tertiary package. Now, NZUSA are hoping that any future tertiary student package will “have student consultation” and “will actually include living costs.”

“Education is what will enable our economy to keep going,” Isabella said, repeating from memory a statement Jacinda Arden made on a livestream. She believes that “This announcement contradicts that.”

Students like Sam from Otago Uni are disappointed that there has been no consultation with NZUSA, especially “considering how long it took to announce [the package].” Ben, also from Otago Uni, said something similar, and added, “It feels like we’re being expected to live with hardship through Covid-19 while across society people are getting more support than ever. Our lives have been put into a holding pattern as much as any other group, but we’re still not receiving assurances that we’ll be secure enough to keep ourselves afloat heading into the winter months. I don’t know if another $1000 on our loan to buy shit tonnes of textbooks to burn to keep us warm is a cracker result.”

New Zealand student debt sits at around $16 billion. Students believe that it is unfair to add more debt to a generation of students entering a recession. Kayli, a student at Otago, said this was “disappointing” and “is not any sort of solution.” NZUSA took to Facebook to state: “increasing debt is NOT a support package.”

Recent Otago graduate, Olivia, has observed that many businesses are pausing their graduate programmes because they cannot afford to hire new people, particularly those they will need to train from scratch. “Pretty scary stuff for students leaving studylink with zero savings,” she said.

Xavier said that when Labour came into office, he expected the Labour government to decrease student debt, not increase it.

The package is too little and too late

Students are questioning why it took so long to deliver a lacklustre tertiary support package. Kayli said it “does not go far enough to support students through the Covid-19 pandemic.” Sam, another Otago Uni student, added that not only was it not good enough, it was disappointing how long it took.

When asked about the three week wait for this announcement, Hipkins said “We understand students’ concerns, which is why we moved quickly on becoming government to introduce fees free and an extra $50 a week in support.” Hipkins also said the Government “acted decisively during the onset of Covid-19 to introduce wage subsidies, which are available for casual employees including students; and to address the pastoral care of students in halls of residence.”

Hipkins believes that “The changes announced today will provide some assistance for students and gives us time to consider other options as part of a much wider package for the short and medium future of tertiary education.”

Tangi, who is a Otago Polytechnic student believes that “It's a piece of shit package that should have happened as part of the immediate response. Students have been asking for assistance the whole [lockdown] and this is their response?” Another student from Vic, Annabel, who also contributed to the reporting of this article, believes that “nothing less than a universal student allowance is going to adequately assist students.”

“People are dropping out and that should be enough to make them worried,” Tangi claimed. The Minister for Education has been asked if he is aware of the number of student withdrawals from tertiary education due to Covid-19.

Tangi believes that Studylink payments should be doubled and students should have access to payment cards like WINZ, whose clients use cards at approved stores to pay for essential goods. Additionally, they feel that it is “criminal” that students’ only option is to take out a loan “when all other demographics are getting direct assistance from the government.”

Isabella, like many other students, believes that students are one of the most vulnerable communities during Covid-19. “Students are literally just trying to survive,” she said.

Reid, a student from Vic Uni, believes that the increase in course related costs is "an acknowledgement that course-related costs are actually used to keep us alive, and an admission that student allowance and loan living costs aren’t enough to survive on.”

Tangi said “I think it's laughable and they need to announce more changes over the next few days or this could be detrimental for students.”