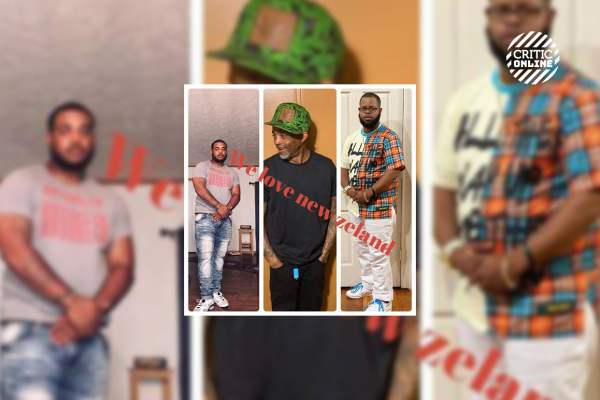 Last Saturday, premier shitposting Facebook page, Could be keen, streamjacked an American music review page, Rock it or knock it music review, with instructions to “hijack [their livestream] by requesting them to listen to drum and bass.” The music reviewers’ initial reaction to the spam was absolute confusion and annoyance, which later turned into a love affair with New Zealanders.

The livestream began with the music reviewers chilling in their studio (a.k.a. the caddy shack), drinking and looking for top notch beats to put on their weekly mixtape. They have high standards, too. As Uncle Terry, the man responsible for the group’s creative drive, put it: “Everybody’s good, but we want the best.”  His wish came true. By the end of the stream, they had the best that New Zealand’s DnB scene could offer.

As soon as Could be keen shared the stream (at about 50 minutes), the requests for DnB started to flood in. At first, the hosts were confused. Then they got annoyed at the hate they were getting for not playing DnB, and stuck to their original playlist. “We’re not doing that tonight, fuck no … that’s not what we want, bro,” said one of the reviewers at the time.

The one-hour mark was a crucial point. The streamjacking could have fizzled out if the requests stopped. Instead, Could be keen’s fans upped the ante, requesting shoutouts to ‘upcoming musicians’ like Mike Hosking and David Bain, requests to play Scribe, Dane Rumble, Dave Dobbyn, the New Zealand anthem, and the “underground banger” Poi E. “I’m not doing that shit tonight … I don’t play that shit,” one reviewer said.

Eventually, the music reviewers were unable to hold out against the mounting pressure and angry reacts from hundreds of dedicated New Zealanders. The first three DnB tracks they played were Magic Carpet by Bou, Get Physical by Culture Shock, and Moments by Macky Gee. Not a bad introduction to the genre.

Then, Rock it or knock it got cold feet. They tried to pull back from the Could be keen fans, called DnB “trash,” and told them to “get the fuck out of here.” For the next hour they demanded five dollars per DnB request. But once Uncle Terry left, the other reviewers softened up to the kiwis. At about two hours and 15 minutes in, On the Rark by Machete Clan played, and the music reviewers were converted to DnB. “I actually fuck with that song,” said one reviewer. They did not, however, fuck with the next song: Dane Rumble’s Cruel.

By the second and third stream, the music reviewers were loving the DnB, despite not knowing what any of the New Zealand references meant. The reviewers announced that Rock it or knock it music reviews would now dedicate an entire day of the week to New Zealand and our requests. New Zealand’s day is Friday for their time zone or Saturday for us.

When asked about their recent success in New Zealand, Rock it or knock it said it was “truly remarkable to say the least,” but they also “want to give thanks to our family for the continued support [for] the long nights in the studio away from them to entertain New Zealand, [their support] is nothing short of phenomenal.” They also added they’ve got a big surprise coming in the next stream. I don’t know about you, but I’m hoping they’ve made it onto the RnV lineup.

This historic streamjacking creates a new activity for shitposting pages. Could be keen told Critic “the idea came from Who would what [another shitposting page], who would get me to hijack David Seymour streams with him and I just got addicted from there.”

Whether this is a natural evolution for shitposting pages - forever hungry for new content - or just a once-in-a-quarantine success, remains to be seen. “I’ll keep doing them as long as they’re funny,” said Could be keen.