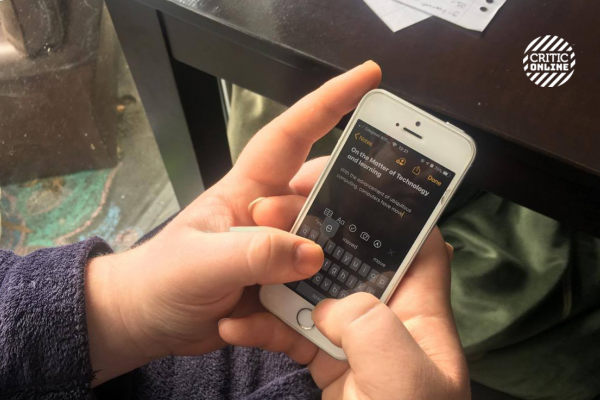 Hot take: online learning is shit without a functional laptop

Students left to type assignments on their smartphones feel that universities have failed to consider accessibility in the transition to online learning.

Mapihi, a student at Otago, said she had to make “major adjustments to [her] learning”. Her laptop broke the week before the lockdown and she did not have the money to get it fixed. “I now study mainly on paper, then have to type assignments into my phone and send them to friends to upload from their laptops.”

She called AskOtago straight away, but they said they were unable to provide her with a laptop. When she emailed AskOtago a few days later, they said they did have loan laptops but there were none left. An AskOtago staff member said he would keep the query open in case they did get more laptops, but “my expectation is that this will not be anytime soon.”

The University suggested to Critic that Mapihi should contact AskOtago as “they are well set up for these types of queries”. The University did not respond when Critic pointed out that she had already gone to AskOtago, and did not comment on how they intend to make online learning accessible to students.

The latest email message from Vice-Chancellor Harlene Hayne to students, on Wednesday 1 April, stated that “a few glitches are likely to happen as things get underway.” She said that “[s]hould this arise as an issue, we will do our best to help you find a solution.” The University has extended the deadline to withdraw from papers and get a full refund if a solution cannot be found.

Even if repair stores open, Mapihi cannot afford to fix her laptop. Since her flatmate left Dunedin, she has been paying extra rent. “My family all pulled together to send me a food parcel but I can not rely on them for constant financial support as they also have their own rent to pay,” she said. She will keep typing assignments and completing coursework on her phone unless another solution is offered to her. “It's a shit situation for everyone,” she said.

Nicole, a BSci student at Otago, broke her laptop screen the afternoon before the lockdown when she dropped her charger on it. “It's driving me crazy,” she said. She is using a cheap Netbook as a replacement, but the limited storage means she can’t download apps like Zoom. The Netbook often deletes her work without saving. “It got to the point where I'm just using my flatmates laptop whenever he can spare it.”

Nicole raised the issue with the University during “those weird daily wellness checks”, but was told to talk to her Head of Department about it. She doubts they will be able to help. “I do wonder how people with no internet or no computer are coping.”

“My wifi sucks ass,” said Adam, a Geography student. He is in lockdown at his parents’ house and the download speed is “at best half a megabyte, which only loads a couple seconds of a lecture at a time.” He said that it takes him between three and four hours to watch a single lecture.

A CELS191 student, Cheyanne, said she “ended up rage quitting” her online lab after it took half an hour to load a five minute video.

“It’s definitely making it harder for me,” said Maddie. She tutors PE privately, but cannot access Zoom. She thinks her laptop, a 2011 Macbook, is too old to download the application. She is frustrated that she can’t screenshare with her students.

Alex is a Pharmacy student in a similar situation. “Today I tried to do two Zoom workshops with my computer shutting down due to "cooling fan fault" during both workshops,” he said.

“In my opinion, [the Uni] didn’t put enough time or thought into this and the students are paying for it,” said Adam.

Otago is not the only university with this issue. Connor is an honours student at the University of Waikato, and his laptop charger was chewed through by a flatmate’s cat on day two of the lockdown. “I felt sick immediately,” he said. He has also resorted to typing assignments on his phone.

He has had panic attacks about his situation. “I'm in my third day of scrambling together pieces of assessment across multiple formats, plus worrying about how I'm going to provide content for my tutorial classes,” he said. “Beyond that, I'm in a position where I have relatives who can chip in to paying for the cost of these supplies. Some people aren’t so fortunate.”

“I can appreciate that this is all a lot to deal with as a large organisation,” Connor said. But he, like other students, believes that during the time when universities were preparing to put their courses online, students should have been given the time to prepare for how they could study from home.