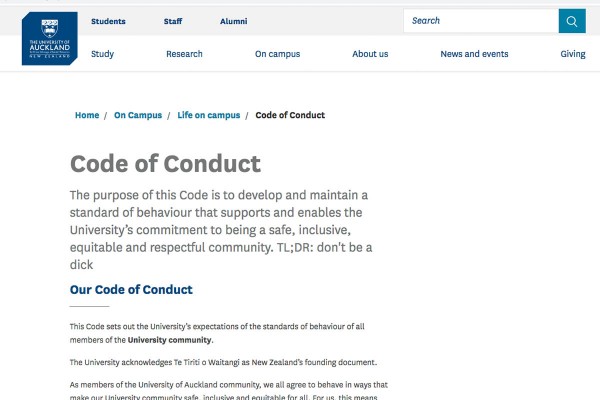 The University of Auckland has introduced a Code of Conduct (COC) to regulate the behaviour of both staff and students.

The Code is designed to foster a “safe and inclusive” University environment. It sets out four pillars of manaakitanga, whanaungatanga, kotahitanga, and kaitiakitanga. The first words of the Code recognise Te Tiriti as the founding document of New Zealand.

“Basically and casually: don’t be a dickhead,” said Education Vice-President of Auckland University Students’ Association (AUSA), Emma Rogers.  “A lot of student leaders who worked on this were really happy to see this accepted and adopted in the Senate.” The Code “sets out how we, as students, can expect to be treated and overall how we want to conduct ourselves, for lack of a better word.”

Emma and the President of AUSA, George Barton, worked “collaboratively” with the University in a working group to develop the Code of Conduct. They took the proposal to the Student Council to vote.

“There was a bit of a shift” after the proposal went to the Student Council, Emma said. The Student Council pushed for the University to introduce the Māori values such as manaakitanga as well as English rules, and to respect Te Tiriti.

“Because it is a code, it will not be enforced directly,” said the University of Auckland Vice-Chancellor, Stuart McCutcheon. “Our preference is to guide people towards appropriate behaviour before enforcement becomes necessary.”

“The issue is not so much about improving student behaviour, but rather about encouraging all members of the University community to behave appropriately towards one another and to think about how their behaviour might affect others.”

The smooth introduction of Auckland’s Code is in contrast to the controversy around Otago’s Code. When Otago’s Code of Conduct was introduced, it was met with protest from students and outspoken staff members. Protestors were outraged by the punitive measures introduced in the Code and the lack of consultation with students.

“In order for any code to effectively mandate behaviour, students must have a sense of ownership of it, instead of feeling as if these rules are being imposed on them,” said OUSA President Jack Manning. He said OUSA would not support Otago’s Code of Conduct if it was introduced today. “We believe that prohibition of behaviour outlined in the Code, particularly off-campus activity such as flat initiations, often results in such behaviour being driven underground, making it more dangerous.”

In contrast, Emma Rogers said that Auckland students were hardly surprised by the Code of Conduct. She said that “generally it has been a well-accepted document and already adopted into AUSAs advocacy service, alongside the Student Charter, to help students in disputes and claims.”