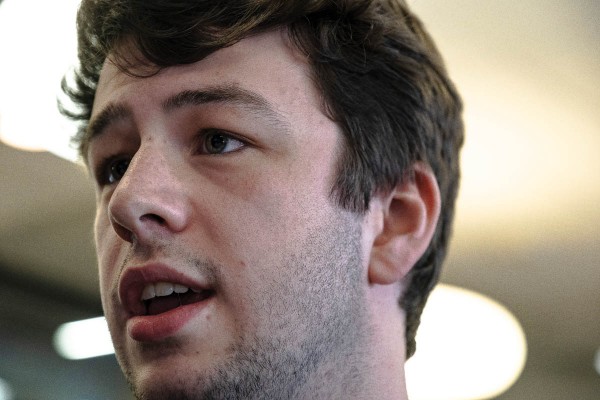 It’s more of the same for OUSA as Jack Manning takes the Presidential Crown. Jack, who prides himself on being described as “the poor man’s James Heath,” proved to be the most vanilla presidential candidate and won on being everyone’s second choice in the single transferrable voting (STV) system.

Will Moffett initially won with 1279 votes to Jack’s 1266 in the first round. But, when Sam Purchas’ 861 votes were re-assigned, Jack bumped up to 1710 votes and left Will behind on 1606. In the words of one spectator, the applause that followed the announcement of Jack’s win was “short and perfunctory”. Will Moffett’s cloud of breathas swiftly disappeared like the phat cloud of vape smoke they arrived under.

Jack wandered around dazed and told Critic he was “in shock,” but recovered and said he was “immensely proud” of the other candidates. “I will hopefully implement a lot of their ideas … I want them right there next to me.” Debatable whether that’ll happen. Will Moffett initially declined to comment to Critic before he could “sleep on it” and went straight to Leith Liquor with his mates.

He later turned up to the Critic office rosy-cheeked after a 21st with his two “womangers” attempting to keep him in check (the man has a personally engraved hip flask). They were gutted they didn’t succeed in getting “an OUSA outsider onto the Exec, and breaking the mould,” and said that if Moff hadn’t refused to lecture bash or go into halls, he probably would have won. To be honest, we wish his “womangers” Tessa and Bella had run for President; they were great.

As he was leaving, Will said, “Jack Manning is a really nice guy, but he didn’t get head boy. I did.”

Last we saw of Sam he was walking off into the twilight, alone, in a slightly tatty multi-coloured suit. Good luck with your Chemistry Honours. See you next time there’s an election, we guess.

Spectators said Jack’s win was a surprise after Will and Sam’s strong debate performance and campaigns. They described the result as “underwhelming,” “anticlimactic,” and “boring”. “That’s not even a hot take, it’s just true.” Another said that “it was the whitest outcome; there’s two Jacks and two Joshes on the Exec”.

When asked if he was going home to celebrate, Jack Manning said, “No, I’m going to do some Bible study, of course I’m celebrating.” Rude to Christians, but ok.

Outgoing Education Officer Will Dreyer said he was “stunned, shocked and surprised” by the results but thinks Jack will be able to do it, with “a lot of NoDoz”.

Jack’s win probably hinges on his calculated attempt to hit Archway lecture theatres every hour on the hour and push halls of residences real hard. Following in Daddy James’ footsteps.

He said his “number one goal is keeping people safe, so that takes a lot of forms: that’s accessible drug testing, that’s mental health support and awareness, that’s any way I can keep people safe.” He then praised James, a lot, and said seeing him in action is what inspired him to run (kinky). “Critic put it very well last week - I’m the poor man’s James Heath. I can only aspire to be as good as him.”

Although STV shook up the results, outgoing Finance Officer Bonnie Harrison said, without STV “you’re just a radical getting elected by fanatics”. On the new exec, she said, “They better fucking get their shit together for 2020”.

Georgia ran unopposed, and retained her position as Admin VP, receiving 3259 votes and 331 no confidence votes. “I thought I wasn’t going to win,” she said. “That no confidence vote put up a good campaign”. Ha. Ha. Good. One. “I wish I ran for President though,” she said. “Why didn’t I?” We don’t know, sorry Georgia.

Georgia seemed pretty gutted until Jack walked in the door, when she put on a smile.

Josh received 3322 votes against 272 no confidence votes. Josh was unsurprisingly unsurprised by his result. In his usual soft-spoken way he said 2020 “should be a wild year”. In a hint of potential tea to come (please, Critic really wants some drama) he said he was “upset” that Josh Smythe made it in as Clubs and Socs representative.

Outgoing Finance Officer Bonnie Harrison said Josh (Meikle, not Smythe) is “bomb as” and advised him to “ask for more [money]. Be greedy.”

Michaela cleaned up the Welfare and Equity Representative position, with 1533 votes in the first round. After Josh Stewart was knocked out she boosted to 1919 votes, with Arthur Hon following behind on 1155 votes. Michaela was happy with the win but said “my brain is fried”.

“I am looking forward to working with funding on an independent body for sexual assault with Thursdays in Black, and bringing some balance onto the Exec. There’s not too many wāhine, so I hope the women who are there can support each other and get more minority voices heard. I’m also looking forward to supporting the ex officio Exec too.”

Arthur, the sweetie, said he expected the result. “All my energy went into the SilverLine Festival this week; I think that’s where I can make bigger change in Uni,” he said. He’s about to partner with a bunch of Dunedin organisations like Life Matters and Keep Dunedin Beautiful to make them short films. Wholesome. He’s excited about Arina winning International Officer. “I’m an international student still and I think she’ll do a good job.” Josh Stewart said he was happy the campaign was over, but won’t stop working behind the scenes. “It’s great there’s going to be some more diversity on the Exec; they didn’t really need another white man.”

Arina took the International Rep position with 170 votes to 14 no confidence votes. She said she is “really happy” and is looking forward to getting started and ensuring the diverse groups of international students continue to work together. She also unironically said she was happy with the presidential result.

Hanna won with 310 votes against 23 no confidence votes. She didn’t turn up to the results announcement. Critic assumes she was busy doing postgrad stuff. Like drinking coffee or writing a dissertation, or something somehow more boring than OUSA. She later told Critic it felt “good” to win. “[It] was a close race but we got there, fam. Bought myself a $50 cash gift to celebrate. Can't wait to smash exec work 2020.”

Francesca Dykes took 1913 votes to Liam’s 1284, with 428 no confidence votes. Only Liam was present for the voting announcement, as Francesca was at work.

Liam was “a little disappointed” in the results, but still answered our questions with a smile. He said he “should’ve done more lecture bashing”, but believes that Francesca’s previous work with the Dunedin City Council will be beneficial to the role of Political Rep. He is still planning on running for a position in the Exec next year.

Another year, another victory for Josh Smythe. After being roasted by his opponents in debates for not doing his job, Josh won Clubs and Socs Rep for the third time. People will be able to complete entire degrees without ever having a different Clubs and Socs officer. It was not a clean sweep, though. Tulsi Raman’s vote count was bumped up in the second and third rounds, but Josh won with 1680 to 1440 votes at the end. 442 people voted no confidence, the highest proportion of ‘no confidences’ in any election.

“I’m really stoked that the people of this fine city trust me, that they want me back,” Josh said after the announcements. “I reciprocate that and I’m gonna continue providing for the people in whatever way I can.” He was, unsurprisingly, confident in his ability to do the job he has been doing for the past two years

His competitors weren’t so sure. When asked whether they had any faith in Josh to do a good job as Clubs and Socs Rep, both Robert Griffith and Paul Gourlie (Mac) had a clear answer: “No.” Robert then left the room (probably in despair). Mac said that he has “no faith in this man to do it,” but will “always continue” to hold him to account. Tulsi said, “I just hope he does something different for once and actually makes a change.”

Emily won the position with 3334 votes to 272 no confidence votes. Emily was not present for the announcement as she was working the late shift at Subway. Intrepid reporter Nina Minogue ventured down to Subway to get Emily’s hot take, or should we say spicy buffalo chicken sub with jalapeños. Yeah baby. Comedy. Emily was unaware of her win until Nina entered and seemed pretty stoked. She said “I’m stoked, ready to go and excited for next year,” while slinging sandwiches like a champ. When asked about how it felt to run uncontested she said, “just because I ended up running uncontested, I don’t want people to think I’m not up for the job. I would’ve backed myself against anyone and I’m going to prove that.”

Outgoing Academic Officer Will Dreyer said, “I think Emily will make a really good Academic Representative. She sat on the OUSA Education Committee this year and I’ve been really impressed with her competency, her integrity, and drive. She’ll make OUSA proud.”

Jack Saunders came out in front in round one with 1018 votes to Jesse Drake’s 905 votes. Charlotte Brewer boosted up to second in the second round, with 1047 votes. Charlotte then very nearly closed the gap, coming up to 1516 votes against Jack’s 1599 votes. 396 people voted no confidence. In other words, you’ve got to be a fucking nerd to understand the results.

The residential announcement started off with a bang with Jack Saunders being announced as the Political Representative. The crowd hesitated, a few scattering claps were heard. Ah, wait a second, it was a classic OUSA mix up! Just another mistake from our student body, what a gag. Nice of them to think of comedy at a time like this. There was a quick correction, and the show moved on.

Jack was excited but not that excited: “I have a 25% test in about an hour so I haven’t really had time to process.” He than ran from the room, a cartoon trail of dust in his wake. The other candidates were disappointed at the loss, but took it well. Charlotte said she was “feeling proud of my good mate Jack Saunders,” while Amodini said, “I don’t really know Jack at all”. Overall, the loss was probably the most devastating for Jesse, who was running for the position a second time. When asked if he was going to try again in 2020, he slowly shook his head: “I think being punished twice is enough for me.” Jesse, consider getting into BDSM. Overall, Critic looks forward to an Exec full of people named Jack and Josh.