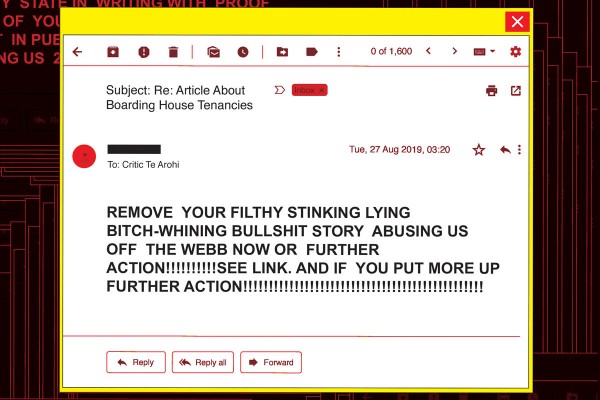 Boarding Houses and Illegal Contracts: How a Dunedin Landlord Got Her Tenants to Pay Extra Rent

Don’t you just hate it when your landlord emails to say that “your father is DISGUSTING PUTRID AND RUDE”? And accuses you of “RUDENESS, DISGUSTING BEHAVIOR, DISGUSTING MOCKING AND BULLY LAUGHING, RUNNING YOUR MOUTH 10000 MILES AN HOUR WITH BS”? That’s the kind of treatment that Jason* went through at the start of 2018. It’s not hard to see why he wanted to leave his flat. Jason tried to get his fixed-term lease ended early, but the Tenancy Tribunal ordered that he was bound by the lease and, like most tenants, had to pay rent on the property until his landlord found a replacement.

When emailed for comment about whether she had rented out the Heriot Row boarding house on an unenforceable, illegal fixed-term lease and led students to believe that they had to pay rent on a fixed-term basis, Karen Brown said “WE SUGGEST  YOU WRITE  ABOUT  OTHER PROPERTY   NOT  OURS WHICH   YOU KNOW NOTHING ABOUT . THERE IS ALREADY ANOTHER ARTICLE FULL OF LIES  ABOUT  IT   BY  RETALIATING LYING TENANT AND  MORE LYING AWFUL CRITIC REPORTERS.”

Once Sam knew his exam dates, he gave notice of when he would be leaving the flat for the summer. And he didn’t have to pay rent for that last month and a half after he had left the property. He saved himself $1125.

If your flat meets these five easy requirements, you can save money like Sam. Your flat is a boarding house if:

Brown, who has appeared in 25 Tenancy Tribunal orders since 2016 for her four properties, took Sam to the Tribunal to seek that extra rent. She lost. Sam didn’t have to pay the rent for the end of the year. That order was made in June of this year.

In the time between the Tenancy Tribunal’s 2017 order that the Heriot Row property was a boarding house and Sam’s case, seven tenants were ordered to pay rent on the basis that the fixed-term lease was enforceable. Nothing had changed about the property; it was still a boarding house. But the tenants didn’t know the law, so they didn’t raise that argument.

The burden is completely on tenants to figure out that a property is a boarding house and raise that with the Tenancy Tribunal. If tenants don’t make the argument, the Tribunal will enforce the fixed-term lease against them and order them to pay the rent, which is exactly what happened to Jason.

When Jason rented a room in the Heriot Row boarding house, he was not happy with the state of the property. Soon after moving in, he sent Brown a list of problems he found. She told him that his complaints were “A OUTRIGHT DELUSIONAL BLATANT LIE” in an email that Critic has.

Among other things, there were piles of empty boxes and bags in the living areas. “WHAT IS TRASH TO ONE IS TREASURE TO ANOTHER,” his landlord wrote in an email. “THOSE ARE USEFUL BOXES AND BAGS.” She had a claim for everything, even describing the gaps around the windows in Jason’s room as “GOOD PASSIVE VENTILATION”.

Jason called in his dad to help, and Brown began to send unfriendly emails. After a phone call, she emailed him “[Y]OU ARE ALSO DISGUSTING AND ARROGANT IN THINKING YOU KNOW IT ALL THEN USING YOUR DELUDED THOUGHTS AND BS TO TRY TELL ME OFF”. It continued, “HENCE IF I SAID ‘FUCKING ASSHOLE’ [on the phone] THEN IT REALLY IS WARRANTED”.

After these interactions, Jason wanted to leave the flat pretty quickly. But he had signed a fixed-term lease and he didn’t know that he could leave. So when the landlord said, “U MUST PAY TILL REPLACEMENT TENANT WHICH IS NOT FOUND YET”, he continued to pay rent. Then she told him “[Y]OU MUST PAY RENT FULL YEAR WHILE YOU PERSIST IN BEING SO UNREASONABLE!!!!!!!!!!!!!!!!!”

Not wanting to face that kind of living situation for a whole year, Jason went to the Tenancy Tribunal to get out of the lease. And he succeeded on his claim about the state of the property. But the Tribunal said he had to pay rent up until the date of a new tenant taking the lease.

Chris lived in the Heriot Row boarding house at the same time as Sam. He signed a fixed-term lease just months after the Tribunal found in 2017 that the property was a boarding house. “It was my first ever time flatting so I didn’t know too much,” he said. He wanted to leave before the end of his fixed-term contract too, but didn’t really understand the law.

After some confusing decisions, “we now have a clear picture of what is counted as a boarding house,” said OUSA Student Support Manager Sage Burke. He said that it was “disappointing to hear that landlords are still claiming a property is not a boarding house even after the Tenancy Tribunal has made a ruling on the matter”.

“It is important for tenants to be given correct information about the property,” he said.

Matt Cutler, of Cutlers Property Management, believes the High Court’s interpretation of the boarding house provision in the Residential Tenancy Act is incorrect. By deeming certain properties to be boarding houses, he told Critic the Tenancy Tribunal is ignoring the parties’ intentions. Essentially, he believes that if tenants have signed a fixed-term lease, it should be enforceable.

Cutler also notes that previous articles “haven’t mentioned the other side of the equation where [in a boarding house situation] a landlord can give tenants 28 days notice to move out for no reason at all or 48 hours notice if they are behind in rent.” Neither side is secure in a boarding house arrangement and Matt Cutler definitely knows that. Tenancy Tribunal orders show that Cutlers Property Management have used the law on boarding houses to conduct construction work on a George Street property without prior notice or consent of the tenants. So an order that a property is a boarding house will not always benefit the tenants.

But most of the time, not having to pay rent over summer will be worth it for student tenants. The situation in Dunedin is unique because a high proportion of tenants are students and they don’t want to live in a property year-round. That’s why landlords in Dunedin deny that their properties are boarding houses. They want students to pay rent over the summer, even if that means misleading them about the enforceability of their leases.

Brown continued to rent her property on fixed-term leases, leading her tenants to believe that they could not leave. The Tribunal allowed her to get away with it and enforced those leases, because the tenants didn’t know any better. Tenants assume that their landlord won’t mislead them into signing an unenforceable agreement. But the Tenancy Tribunal should not operate on the same assumption as tenants who don’t know what they’re doing. If the Residential Tenancies Act says that landlords can’t rent boarding houses on fixed-term leases, it shouldn’t be left up to tenants to spend money, do legal research, and enforce that law.

Any students having trouble with their flat, or who suspect their flat may be a boarding house, are encouraged to seek help from OUSA Student Support on 03-479-5449, or email help@ousa.org.nz