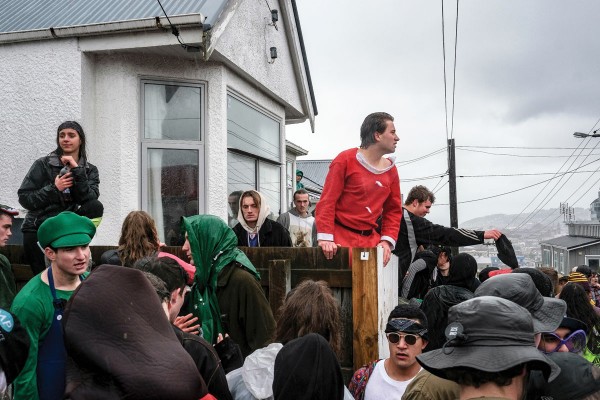 Partying in rain ponchos is fun until the hypothermia hits

Students traversed freezing weather and hiked up a small hill to make it to the annual, un-ticketed Agnew Street Party. The party went ahead despite a steady temperature of 4°C and persistent rain. “You can’t deter Otago students,” said one of the organisers.

An organiser told Critic that there “were definitely as many people as I expected, even though the weather was so grim”. Another resident noted that they thought fewer people would show up because of the private Facebook event (advised by the Proctor) and the bad weather (possibly also advised by the Proctor). “It was quite the opposite,” they said.

The event was sponsored by NITRO, but a spokesperson for the brand, Steve Shaw, would not disclose the full amount of that sponsorship. When Agnew Street residents asked for financial help, “[it] was no-brainer for NITRO to get on board, support the gig and cover the costs to make sure it all went ahead perfectly,” he said.

4700 people clicked ‘going’ on the Facebook event, but actual estimates of guest numbers sit at around half of that number. The residents were largely happy with how the event went. “Overall, would say Agnew was a success,” said one resident. Is it as good as Hyde though? “Agnew is ultimately better … because it is open to all and you aren't caged in like Hyde,” said a second-year attendee.

It’s inevitable that when around 2000 people show up to a street party in the rain, it’s going to get a bit messy. There were no massive problems; just “a few things floating around like doors kicked in, broken arms but I think yeah, just the crowd being generally out of control,” said one organiser.

Pauline Buchanan, St John Operations Manager for Otago, said that the ambulances responded to 13 callouts between 11.40am and 5.10pm. They were “all related to alcohol and/or recreational drug use”. Eight patients were taken to Dunedin hospital, but none were in a serious condition.

When asked whether they would change anything, organisers responded “just more crowd control”. According to them, the party “got shut down early due to the crowd being out of hand”. But a spokesperson for the Police said they “did receive reports about the party and did attend, however we did not shut the party down”. One Campus Watch officer told a Critic reporter on the scene that they were sorry to be shutting the party down, and explained that the Police, Campus Watch, and St. Johns had run out of first aid equipment and couldn’t keep “patching everyone up.”

As for the morning after, the clean up was only “mildly grim” according to one resident. An organiser said that after they got the road sweeper out, “[by] lunch time on Sunday the street was cleaner than most in the student area”.