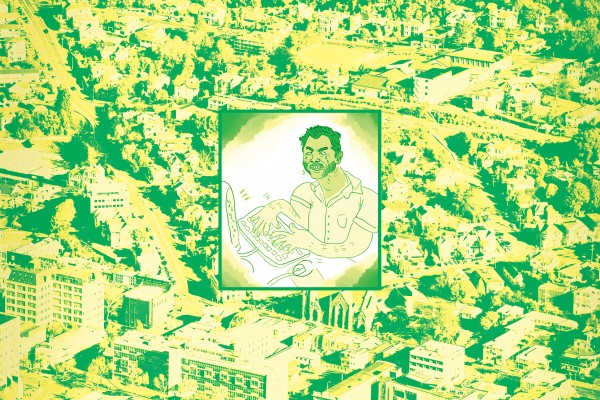 Cutlers Property Management threatened to share current Cutlers tenants’ names and address in a Facebook post if they didn’t retract negative comments made to Critic about their flat.

Last Tuesday Critic requested comment from Cutlers about claims made by current tenants in a Queen Street flat and former tenants of 175 Dundas Street, as well as general complaints from two other flats that did not want their addresses shared.

Matt Cutler did not respond to specific claims as he said he did not want to “be airing [Cutlers’] dirty laundry in the critic [sic]”. In a follow-up email, he said Critic could speak to “the girls” a.k.a. property managers Aimee Marsh and Amy Griffin off the record. Critic Editor Charlie O’Mannin said Matt could send him anything that he thought would inform the story but heard nothing back.

Then, at midday on Wednesday, Matt Cutler sent an ultimatum to the tenants at the Queen Street flat who spoke to Critic.

Directed at one tenant, Gus, Matt Cutler’s email said, “I actually thought you were a good bloke ... so find it troubling that you would go out of your way to give [Critic] false information for misguided, vindictive purposes.”

“Instead of sending our answers back to [Charlie O’Mannin] allowing him chop and change it as he wishes to suit his narrative, we have decided to take matters into our own hands and just post the truth here for everyone to see,” said Matt Cutler.

“I have to take control of the situation.”

That “control” involved threatening to post the tenants’ names and address on Facebook, as well as refuting their claims, if they did not receive a signed statement from Critic before 4:30pm on Wednesday saying we would not print anything about the Queen Street flat.

Gus and his flatmate Tim went straight to Hahna Briggs at OUSA Student Support who helped draft an email outlining to Cutlers that posting their personal information to Facebook could breach the quiet enjoyment of their flat under the Residential Tenancies Act and be a harmful digital communication under the Harmful Digital Communications Act.

In his response to Hahna, Matt called the tenants “a flat of liars”. He said, “perhaps you should be advising [the tenants] to be honest rather than telling me I’m wrong for letting people know the truth. I have no doubt that if the situation was reversed that you would be finding sections of various Acts that go against knowingly making false public statements.”

“If they aren’t willing to retract then I will be posting correspondence today or we could leave it and just file a case against them and the critic [sic] for slander. I’ll leave that with you but the answer here seems pretty obvious to me,” said Matt Cutler.

The tenants refused to respond to Matt Cutler’s threats. “We have done nothing but tell the truth,” said the tenants; Cutlers’ response only made them feel stronger about speaking to Critic.

Cutlers went ahead with a long Facebook post just after 6pm that left off the students’ names in a “last minute decision” to “avoid more drama than there needs to be,” according to the post.

Our original story was an investigation into Cutlers’ Property Management. We interviewed former and current tenants, spoke to OUSA Student Support, and looked into recent Tenancy Tribunal rulings. The Queen Street flat was one of two flats that agreed to go on the record.

We got on the story after receiving numerous tips throughout the year that Cutlers were slow to repair student flats and hard to get in touch with. Gus’s claims were no different.

Gus told us that even though the Queen Street flat “was and still is a dump,” they signed because it was cheap, they were late on the rental market, and they’d flatted with Cutlers before so weren’t expecting trouble.

But they experienced a string of problems.

The first issue was with a dishwasher. There was space in the kitchen unit for a dishwasher and the students allege Amy verbally promised one in February. She confirmed in a text on March 15 that she would follow it up with the owners. The next day Gus texted Amy they were considering giving her a 14-day notice for the dishwasher as it had been promised a month ago.

Amy said “I am pretty disappointed that you’ve threatened me with a fourteen day notice after all I’ve done for you guys so far” and said they couldn’t demand a dishwasher as it wasn’t in the tenancy agreement.

The tenants apologised and felt “a bit embarrassed” about it since they weren’t fully informed on how 14-day notices worked. But, they were also disappointed that “Amy and Matt promise stuff and if you try and call them out they try and make you look like a bad guy,” said Gus. They just wanted a straight answer, he said.

Matt Cutler said “we don’t deal in verbal promises because they create grey areas”. He said “if a dishwasher was promised then it would have been written in the contract”.

However, Sage Burke from OUSA Student Support said verbal promises still form part of the agreement and should be delivered, even if not in the tenancy agreement. “The tricky thing is that you can’t prove verbal promises” and they probably wouldn’t stand up in the Tenancy Tribunal. Sage said “if they promise something verbally, send an email or text to confirm,” as Gus did by texting Amy about the dishwasher.

Another problem with the flat was that floorboards kept breaking in the main corridor. Cutlers have fixed some of them, but Matt Cutler said they have received “no notification about floorboards needing fixed” since April. However, Critic has seen screenshots that show that Gus notified Amy about further broken floorboards by text on May 20 and Tim notified her by email on June 2. Amy replied to them on June 4 the boards would be fixed, but they remained broken as of Critic going to print on August 1.

In May, Gus’s flatmate Matt realised his light switch had two exposed live wires which had the potential to electrocute someone who touched them both at the same time. He noticed the switch had given out electric shocks, but didn’t realise it was so dangerous until his dad saw it.

They informed Amy and the switch was fixed by electricians coming in for the heat pump the next day. Although it was fixed quickly, the tenants said their main problem was that “we were rented the flat with those potentially fatal wires exposed to begin with”. It shouldn’t have passed an inspection, they said.

The Queen Street property is also extremely damp, said the tenants. Shoes and clothes have gone mouldy, despite windows being left open every day. “Some of the windows don’t stay open; we have to prop them open,” said Gus. “Clean, dry sheets become wet after a few hours on the bed. I do three to four loads of washing a week.”

When alerted to the damp, Amy advised them to keep windows open and not dry clothes in their rooms.

Under the Residential Tenancies Act landlords are obligated to keep flats in a reasonable state of repair, which includes preventing structural issues that cause dampness and mould, said Sage.

“We hear a lot about dampness being tenants responsibility, but it’s actually both.” The courts have ruled that landlords need to maintain properties free from “factors that cause dampness and mould,” said Sage. “So telling tenants to open windows makes no difference” when there are structural issues causing dampness. “That’s the landlord’s responsibility,” he said.

When the tenants signed the lease, insulation at the flat was defined as "TBC". They assumed this meant no insulation but were fine with it because insulation wasn't legally required before the 1st of July.
On May 22, Amy sent the flat a text stating that the insulation would be installed on June 19. On July 8, Amy emailed the flat to let them know ceiling insulation was completed. Underfloor was not completed at the same time because of stuff leftover under the house from previous tenancies, she said. However, she confirmed that "Underfloor was completed on the 2nd of July".
The flat asked Cutlers for an insulation report on July 23. Amy replied on July 29 stating that the underfloor insulation was actually still yet to be installed and that it was scheduled for installation on July 31. Underfloor insulation is now installed, but the tenants said this was a big example of Cutlers telling the tenants something that wasn't true.

We also spoke to Nina who lived at 175 Dundas Street last year and had problems with Cutlers.

Their front door also stopped closing and they reported it to property manager Aimee Marsh in February. It wasn’t fixed until May.

An electrical fault cut off light to the laundry and hallway in July. Nina said they told Aimee verbally during a flat inspection then followed up in a text. According to her, it took over a month for someone from Cutlers to come and look at it and then wasn’t fixed until after the October 29.

“We put up with it because it was just the hallway, but it was still pretty slack from Cutlers,” said Nina. “It was so annoying having to do our washing in the dark.”

“Aimee was a pain in the arse to communicate with; we said we were happy to come into the office; we tried to call and email but she wouldn’t get in touch with us for weeks.”

Aimee also asked the tenants to leave their signed bond form on the dining table of the flat when they left.

Sage Burke said this was a big no-no. Students should never sign a bond form and give it to the landlord before they have agreed on how much will be refunded. Otherwise, landlords can just write in whatever amount they want to, said Sage.

The tenants were also told they owed an extra day’s rent because there were 31 days in the month rather than 30 and that they had to pay an extra $100. “We paid it anyway just to get out of there,” said Nina.

2016 Castle Street residents reported similar cases of being charged extra rent by Cutlers because of the leap year.

As per the events discussed above, Critic received no comment on any of Nina’s claims about her Cutlers flat.

Other former and present Cutlers tenants who did not want their details revealed confirmed similar issues with Cutlers being slow to complete repairs – even when essential flat amenities like hot water cylinders, lighting fixtures and doors broke or there were serious leaks.

Several cases have been recently won against Cutlers at the Tenancy Tribunal, including a case by tenants of a boarding house at 1020 George Street for interruption of their quiet enjoyment via repairs undertaken by Cutlers. A 2018 case saw Cutlers pay $4011.99 to two tenants at 32 Garfield Avenue in Roslyn for not keeping the flat in a reasonable state of repair. The property had a broken bathroom extractor fan, vegetation blocking light into the premises, a leaking shower due to unsealed joints, blocked and broken guttering and rotten decking.

After Cutlers’ social media threat several students reported similar problems with Cutlers to Critic. If you have a story about flatting, email news@critic.co.nz.