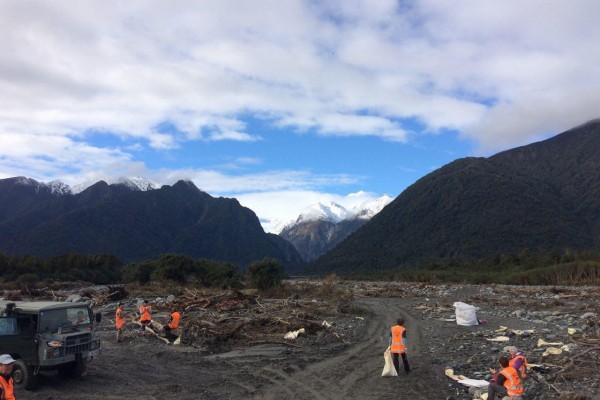 On the weekend of August 9-11, OUSA will send 74 staff and students to help with the Fox River clean up. They will contribute to the removal of “roughly 500 rugby fields worth of rubbish,” said OUSA President, James Heath.

In March this year, flooding broke open a landfill near Fox Glacier (because burying rubbish near a national landmark is a very good idea). The rubbish from that landfill, which had previously been sealed in the ground for over a decade, has now spread throughout the Fox River, the Cook River, and out to the coastline.

Getting rid of the rubbish is a huge job. The Department of Conservation are coordinating the volunteer clean up effort, called Operation Tidy Fox. They intervened after the Westland District Council – i.e. the group who put the rubbish there in the first place – stopped trying to clean it up after two months.

Basically, DOC now needs a lot of people to pick up the rubbish. Otago students and staff from will be some of those people. “OUSA wants to do something about it,” James Heath said. He credited the University, UniCrew, and DOC for helping to subsidise the student volunteers. Those volunteering will only pay $20 for the return trip and accommodation.

Heath said that the response from students has been “incredible”. Within twenty-four hours, OUSA received twice as many sign-ups as they had spaces available on the buses. By sending two busloads of volunteers for a weekend, they hope to make a dent in the rubbish.